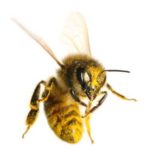 Certain large-brained animals – whales, dolphins, and chimpanzees, for example—as well as smaller brained crows have shown themselves to possess unusual intelligence with abilities to solve complex problems and use tools.  But what about insects?  Could these tiny-brained creatures also possess a similar kind of intelligence?

The traditional answer has been: no.  The intelligence that has been observed in insects has been attributed to colonies and swarms, rather than the individual organism.  But is this necessarily true?

Very recently it was demonstrated that individual bees can learn from other species as well as communicate specific threats to predators from other species. There is increasing evidence of bees’ remarkable abilities.

Bees send female scouts to pick a new nest.  If an individual bee determines that it has found a good spot for the new nest, she then returns to the original nest and does a waggle dance in a figure eight motion.  If she really likes the new site, the dance is more intense with circuits lasting up to five minutes, versus only half a minute for a less desirable spot.  The dance includes a code that tells her fellow hive-mates where the new site is located.

Bees are democratic in this decision making process. They use the dance as a form of voting.  Each bee dances to emphasize a site preference until a majority rule in favor of a particular site.  Once the colony reaches a decision all the bees fly off to their new home.

Entomologists conducted an experiment to study bee’s feeding behavior by placing a dish of sweet water a ways from a hive.  One scout bee soon found it and brought the rest of the hive. The second day, they moved the dish twice as far away from the hive.  Again, scouts found the dish and soon brought many others.  This pattern went on for several days increasing the distances in a specific sequence.  Then, one day when the dish was about to be placed quite far away, the bees miraculously appeared in the place the dish was about to be placed. They were waiting in the spot before the scientists arrived.

A more advanced calculation is also common in individual bees.  This more remarkable feat is their ability to solve the ‘travelling salesman problem’—an extremely difficult and advanced mathematical problem that seeks to find the shortest distance to multiple sites.  Humans have not yet developed a mathematical solution to this problem; instead, they rely on super computers to crunch out all the possibilities.

Yet bees not only judge the shortest and most efficient route to hundreds of flowers per day—they also factor in variables such as whether it is worth going out of the way for a bigger flower.  Furthermore, they somehow remember details of their travel from the air for long trips of at least six miles over days.

Very recently a study has shown surprising abilities of individual bees with abstract concepts.  Individual bees were rapidly able to understand two abstract concepts related to reaching food, the first spatial and the other qualities of difference.  One part of the experiment with rewards for actions they learned about “above and below”, and then “side by side”.  They were then able to identify specific relationships that allowed access to the food.  They were then able to transfer this knowledge to other situations. Further experiments showed that they also understood the concept of difference. This study demonstrates that forms of conceptual knowledge exist in insect brains, not just the more developed mammalian brains.

Where is the Intelligence?

Humans live in large societies with a collective culture, and yet we have our own minds and are intelligent individually.  Couldn’t this be the case in bees?

If the traditional answer is that the hive has this intelligence, then where is it located and how can these individual bees act on their own as scouts and dancers?

Is it possible, instead, that a single bee, despite being a hundredth the size of a human, has an individual capacity with incredibly complex intelligence?