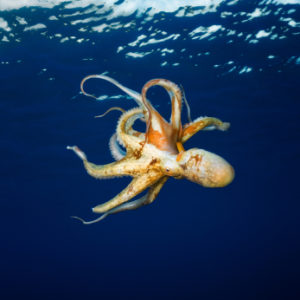 The killer whale pokes his head up onto the floating ice to see the sleeping seal.  Other whales come over to investigate the find.  The first whale then gathers three other whales and they all line up in a row with their tails towards the seal on the ice, and their heads pointing away. All four then start to beat their tails up and down in unison, creating waves that wash over the floating ice sending the seal into the water.  When they kill the seal, they do it very precisely: they cut around the waist, cut off the flippers, slit the skin on the back of the neck and draw it over the skull, snip the spine at the base of the skull, and then take out the complete carcass. (See slide show).

Whales, while already known to have intelligence, have now demonstrated elaborate communication and forms of cultural exchange. A recent study found that each year certain male Humpback whales compose new mating songs and that these popular tunes then gradually spread east from Australia to French Polynesia. This cultural exchange of the most popular songs was found to occur multiple times over a ten-year period.

Too Smart for Captivity?

There are numerous highly intelligent animals in the ocean. Because of their level of awareness, a recent article in Science asked “Are Dolphins Too Smart for Captivity?” Black triangles and circles were painted onto two dolphins in places that they could not see themselves. The two dolphins immediately went to a mirror and started preening—moving, twisting, and turning so they could see each of the markings.  This level of self-awareness was previously assumed to be present only in chimpanzees and humans.

Dolphins show very unusual intelligent and social behavior when fishing.  When dolphins fish, some wear sponges on their noses in order to be able to catch the best fish that are near the rocks.  Researchers have recently documented a very unique dolphin fishing expedition which occurs every fall near Laguna, Brazil.  Each fall a group of bottlenose dolphins heard large schools of fish toward the local fishermen who are wading in the water with nets. When the fish are about to come in contact with the nets, the dolphins signal the fishermen by slapping the water.  Such cooperative actions with human beings can only be described as advanced social learning.

The octopus is also surprisingly intelligent. It can find its way through a maze, solve advanced problems, spread cultural information, and mimic others.  One type of octopus picks up coconut halves that are discarded by Indonesian villagers.  They use their arms to carry the shells, and then, in order to conceal themselves, they flip them over and hide underneath.  They can hide under just one shell, but often use two in order to be able to see through a small opening slit between the two halves. They are also able to rapidly change their appearance so they can hide in plain sight near a wide variety of plants.

Perhaps the most shocking recent find was that of a fish using tools. Tusk fish use rocks as tools to crack open shells and get to the meat inside.  As you can imagine, it is very difficult for the fish to hold the shell in its mouth and then to repeatedly twist its head back and forth in order to smash the shell against a rock until the meat is accessible to them.  Because it has been extremely difficult to observe the behavior of fish in the wild, no one knows how extensive this behavior is, or what other intelligence they might show.

It seems wherever we look in the animal kingdom, there is a version of advanced intelligence.