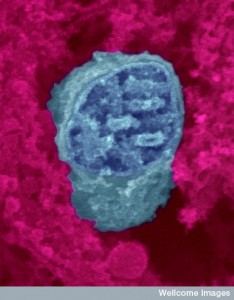 This is the second of a two-part post on the remarkable intelligent work of mitochondria in neurons. Mitochondria respond instantly to mental processes and provide the fuel for all activities of the neuron — buffering calcium signals that determine axon firing and transmission of neurotransmitters; movement of vesicles providing material to the far-flung spaces of the neuron; building and altering structures for neuroplasticity; the electrical spike along the axon; the metabolism that builds proteins, lipids and steroids; and the assembly and movement of the structural tubules. Mitochondria are also vital to the quality control system for the entire cell including programmed cell death. Mitochondria must adapt to each of these tasks, multiply and move into the proper locations. While spawned near the cell body, mitochondria travel throughout the entire cell including axons that are two feet long.

With the help of the neuron’s ER, mitochondria fuse and grow into large branching syncytium. The opposite process of fission or division makes more mitochondria and allows defective parts to be separated and sent to lysosomes for destruction. Both fusion and fission involve elaborate signaling and intelligent communication between mitochondria and neuron. 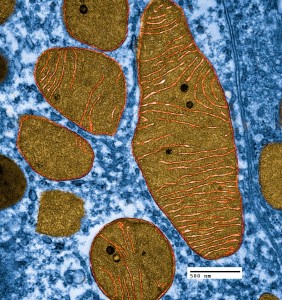 Mitochondria exist in very active networks, not as isolated individuals. They are continuously moving, dividing and fusing. They exist in many different shapes including small balls and long branching rods that share many nucleoids together—equivalent to one large cytoplasm with many cellular nuclei. The shapes, size and number are constantly changing based on dynamic polar forces.

The first pole of this dynamic relationship is division, or fission, where one mitochondrion separates into multiple organelles. The opposite pole is fusion into larger, longer versions. Hyperfusion is a very temporary state of extreme fusion—a reaction to stress when extremely large mitochondria are formed from many small ones.

For the mitochondria, this dynamic replaces the larger cell’s highly regulated cell division with complex scaffolding molecules and spindle. Fusion and fission in the mitochondria are influenced by lipids, negative charge, and curvature of the lipid bilayer. When more proteins are recruited, fusion is promoted. When hydrolyzed, fission is promoted.

Fusion and division are regulated by dynein motors, which not only transport mitochondria along microtubules, but constantly remodel membranes. There are many different proteins involved in the complex inner and outer membrane structures. Division and fusion are driven by Dynein Related Proteins, known as DRPs. These machines remodel the membranes in many different ways. In one process, DRPs form a helix wrapping around mitochondria at the site where division will occur. These rings pinch the mitochondria forming two halves. Fusion, the opposite process uses other DPRs to connect outer and inner membranes. 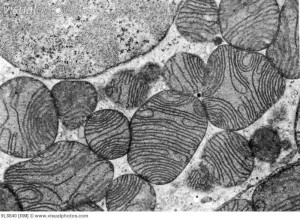 Fission makes small discrete mitochondria and a larger number. These are more able to produce reactive oxygen and stimulate the process of mitochondria suicide, called mitophagy. Without division, mitochondria elongate and become nets that are much more interconnected where DNA can be lost. Division goes against the network assembly and distributes the mitochondria for cell energy demands, with transportation by cellular motors and microtubule transport mechanisms.

Fusion interconnects the network and increases communication with the ER. It dilutes mutations by diffusing the content of shared matrix. Fusion of mitochondria is critical to communication between organelles and network assembly. Without fusion, connected networks dissolve into many individual mitochondria and lose DNA.

Division and Fusion are Regulated From Neuron’s ER

The previous post described the very intimidate and highly structured relationship between mitochondria and the endoplasmic reticulum. Specific proteins manufactured in the neuron’s ER regulate fission and fusion.

First, ER tubules wrap around mitochondria and mark the site of future division. The mitochondrion is then squeezed at this site and the DRP helix is assembled for the machinery of the division. Actin scaffolding molecules are involved in this complex process. The communication between the ER and the mitochondria includes very complex structures called ER mitochondrial encounter structures, or 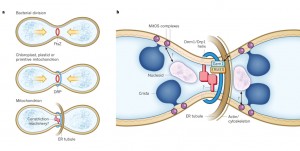 ERMES. The ERMES also helps copy mitochondria DNA. For division, ERMES moves nucleoids to the two tips of the mitochondria so that half will go with each new smaller mitochondria.

Another important machine is the multi subunit inner membrane complex, called Mitos, which works with the ER and organizes the inner membrane into many different functional regions and brings in material from outside the mitochondria. 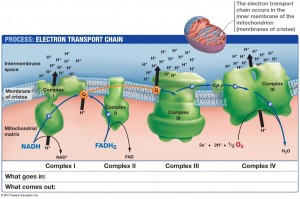 The region closest to the outer membrane, called the boundary region, manufactures the extremely elaborate and important respiratory complex, along with importing lipids and proteins for the project. The respiratory complex consists of a series of four very large machines, which transfer electrons and protons to make high-energy molecules that are used as fuel. Three of these are proton pumps and the fourth is a connection to the Krebs cycle; they are maintained in membrane invaginations called cristae. Cristae, also, need ATP energy in order to stabilize their curved edges. Narrow tubules called crista junctions connect the crista, which house the respiratory complexes, with the boundary membrane where they are manufactured. 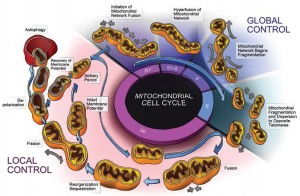 One quality control occurs inside the mitochondria, where enzymes degrade or stabilize damaged proteins. In another method, healthy mitochondria fuse with a broken one and take over the broken mitochondrion’s function. A third mechanism is fission, where a damaged section of mitochondria is broken off and eliminated by enzymes. In yet another mechanism, damaged mitochondria produce reactive oxygen that triggers a programmed mitochondrial death. Sometimes a defective mitochondria with a low membrane potential after use, is broken into parts, which can be recycled. 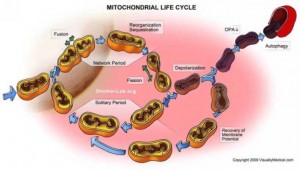 Stress pathways coordinate with dynamics. Healthy electrochemical potential stimulates importing of proteins. Decreased potential causes loss of imported proteins, breakup of long membrane forms which increases division and fragmentation. These small fragmented mitochondria can’t create energy and may die. Another response to stress, such as starvation, is when many fuse together into large forms, which can withstand temporary lack of respiration. 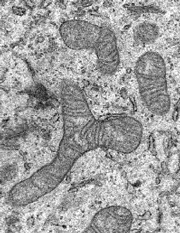 Hyperfusion is a temporary state that is triggered during a crisis. Hyperfusion is a large, highly organized and connected mitochondria network that can buffer stress such as nutrient starvation and ultraviolet light. This increases energy production when one section of the electron transfer machinery is having problems. As soon as the problem is fixed it goes back to the dynamic of fusion and division.

When there is a problem with the central respiratory machinery in transporting electrons, a signal to the cell’s nucleus sends many different proteins to re establish the respiratory process, including multiple chaperones. Also, other signals build the metabolism pathways to use less respiration.

Membrane potential is another trigger of these pathways. Healthy cells make material that is both long anchored trans-membrane and short soluble. When a problem with membrane potential occurs, long forms change to short stopping fusion and leading to breaking up the mitochondria. This pathway toggles between healthy fusion and cell death.

Special Factors of Mitochondria in Neurons 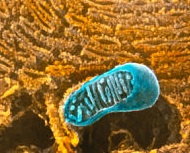 In neurons, mitochondria intelligence is obvious. Mitochondria are constantly moving throughout the neuron. When they are not moving, they engage in fusion, division or kill themselves through connection with cell death lysosomes. Fission and fusion are in constant dynamic based upon the needs of the situation.

When mitochondria move on microtubule tracks, the go back and forth in opposite directions, starting, stopping, speeding up, and slowing down. At any moment two thirds 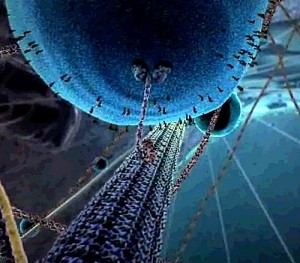 are stationary providing local energy, anchored by small tubules or off the tracks completely. The other third are moving, along with 1500 proteins from the nucleus and thousands of mRNAs.

Neurons are very long with many ionic exchanges including calcium. Mitochondria are distributed uniquely for synapse activity and neuroplasticity. At synapses, mitochondria must provide a tremendous amount of energy and also buffer a large amount of calcium that is the critical signal for neurotransmitter release. 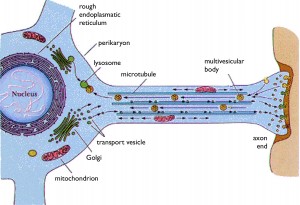 Neurons have a unique protein, syntaphilin, that binds to the mitochondrial outer membrane and immobilizes mitochondria in particular locations. It brakes various motors along the mitocrotubules and then becomes a scaffolding molecule to stabilize the mitochondria where energy is needed. When this is completed, syntaphilin rearranges and re starts the motility.

The axon is so narrow in places that mitochondria may meet others where they can’t get by. They may not fuse in this situation. When they do fuse, they exchange matrix 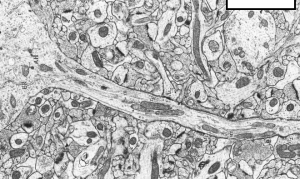 material. In neurons fusion rates are .05 fusions per minute for each mitochondria. The average time between fusion and fission is 5 minutes. The time between fission and the next fusion was 15 minute. The entire cycle is 20 minutes.

Each neuron has thousands of mitochondria in narrow regions. Constant movement in these channels makes for constant fission and fusion. Many brain diseases have defects in the ability of mitochondria to fuse, divide, make energy, or deal with stress. In small isolated regions like synapse where there is high demand for energy, mitochondria link into one large synticium. 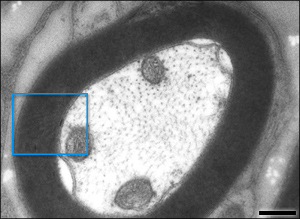 The more the neuron is stimulated, the more mitochondria move to the synapse. Lower stimulation also increased movement but in both directions.

There are many correlations of brain diseases and mitochondrial dysfunction. The details and connections have not yet been fully worked out.

Psychiatric: Mitochondria have been implicated in bipolar disorder with many related genes. It is not clear, but possible, that psychiatric mood stabilizers alter the rate and direction of mitochondrial movements. Phosphorylation and proteins for stabilization regulate this transport. Mood stabilizing drugs are noted to promote migration of mitochondria into synapses. Clozaril and Haldol cause mitochondria to become very large and stay at the nucleus. 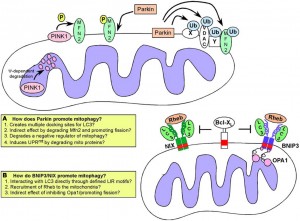 This small microbe, evolving in the eukaryote cell for two billion years, communicates constantly with the neuron, responding instantly to thought. Constant intelligent communication with the neuron determines the mitochondria’s dynamic behavior.

Mitochondrial behavior involves networks of large and small, individual and groups all working together, propelled by the dynamic forces of bipolar fusion and fission, quality controls and need for energy. The constantly moving and changing mitochondria are the center of all complex neuronal activity—travelling to specific locations and providing respiratory energy, chemical buffering and much more. The complexity of this process in motion depends upon a high degree of intelligent communication, all triggered by mental processes. 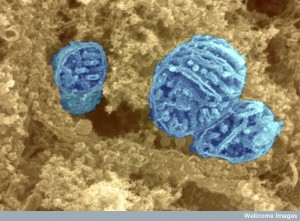