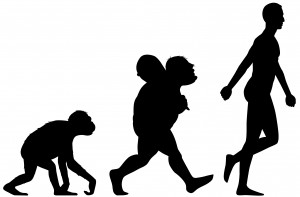 Are human beings different than they were thousands of years ago? How about hundreds of thousands or millions of years ago? Were human ancestors more ‘primitive” with less cognitive ability? Have humans evolved and become more intelligent with the incredible advance of high technology and science? Or were ancient ancestors responding to different situations with the same cognitive abilities and inventiveness?

Another question is whether there have been other advanced civilizations that were destroyed. Some believe that in Central and South America there are airfields from an ancient civilization. 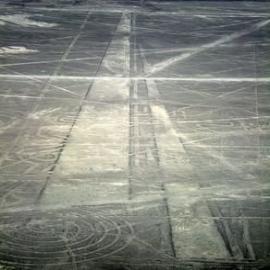 The perfectly straight Nazca Lines in Peru, parallel and intersecting like modern airport runways, were built in a pre Incan culture 2500 years ago. Other large forms at this site that could be discerned only from the air include forms of animals. Some think there are signs of ancient brain surgery.  Stories about ancient high civilizations include Plato’s reference to Atlantis, Indian stories of flying machines in the time of the ancient Vedas, and lost cities in the oceans off Cuba, Pacific Islands, and the Caribbean.

Despite these theories, what science really knows about the distant past comes from archaeology and genetic studies. The word of mouth stories of previous civilizations may be true, but, as has been shown from recent memory research, even current eyewitness reports are extremely fallible. Certainly, stories passed on for thousands of years are suspect.

The means of discovering what really occurred in the past is left to finding artifacts, and genetic studies, both arduous and difficult tasks. With genetic population studies estimating 20,000 to 50,000 total human ancestors on earth one million years ago, finding artifacts is equivalent to finding a needle in a haystack, with the haystack being the entire world. Despite this, remarkable findings continue to occur.

Millions and Billions of Years Ago 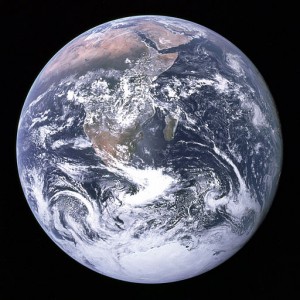 For perspective, some evolutionary milestones include the earth cooling to the point where life was possible about 4 billion years ago, just half a billion years after its creation. Recently, signs of bacterial life have been found from around 3.5 billion years ago. Because 500 million years is not much time to evolve complex bacteria, theories of astrobiology are flourishing.

At 3.4 billion years ago (bya) there is evidence of photosynthesis, and at 2 bya the mitochondrion microbe had taken up residence inside the eukaryote cell. Multi cellularity in the form of eukaryote cells forming larger organisms is found 1 bya. The first simple animals are found 600 million years ago (mya), and ancestors of insects, the arthropods, approximately 570 mya. Complex animals arrived 550 mya when there was an explosion of body types. Fish arrived 500 mya, land plants 470 mya, and amphibians 360 mya. Mammals are first found 200 mya, birds 150, and flowers 130. Dinosaurs were extinct by 65 mya. Primates fossils were first seen from 75 mya, apes 28 mya, 14 gibbons, orangutan 13, and chimps and bonobos 10. Hominia branches from chimps 7 mya. 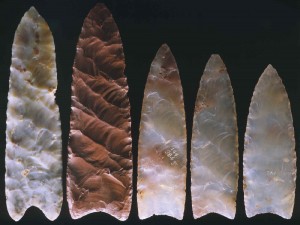 Until this year findings on the Flores Island near Indonesia had signs of humans from 74,000 years ago. These people were called homini (the extinct homo species) florensiensis and have been nicknamed “hobbits” because their small size.

For many years it was believed that the Islands of Crete in the Mediterranean were populated 9000 years ago. 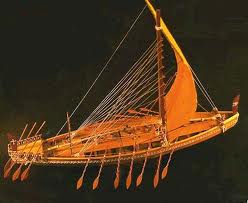 Travelling by sea is a complex behavior for humans, including building boats or rafts, navigating rough seas, and surviving in a new land. New evidence in Science shows hand axes, tetrahedral picks, and cleavers 170,000 years ago on the Island of Crete, and 110,000 years go on the Greek island Ionia. Sea faring ancestors reached Australia at least 50,000 years ago. To travel that distance at sea shows very high level cognitive abilities.

Another dramatic finding is that complex spears put together with multiple parts were recently found in South Africa from 500,000 years ago, 200,000 years earlier than previously thought. Multiple findings from 300,000 years ago demonstrate continuous occupation of an area of intelligent ancestors in Tanzania from that time and to 200,000 years ago. These ancestors were physically exactly similar to modern humans. 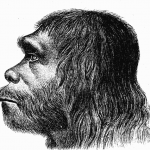 While some believe Neanderthals were cognitively inferior with greater visual and movement brain regions allowing less chance for social networking, Neanderthals 300,000 years ago were able to make a special birch bark glue, used for fastening stone to wood handles. This shows chemical knowledge.

Activity at 164,000 years ago demonstrated knowledge of chemistry using low-grade fire to change the silcrete rock into a harder form.

Genetic studies show that one million years ago there were perhaps 18,000 breeding people, and possibly a 50,000 total population of human ancestors on earth. At the same time there were 21,000 chimps and 25,000 gorillas. But, later there was a drop to as low as 10,000 human ancestors because of a volcanic effect.

There are many very recent findings that show surprising intelligent abilities in ancestors for up to a million years.

The recent finding that ancestors travelled across the sea and settled in Pacific Islands 1.1 million years ago shows great intelligence, feats that would challenge most people today. 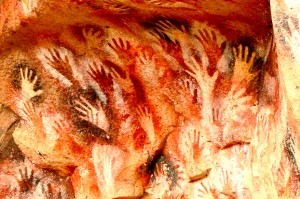 Much of the speculation of ancient cognitive ability compared stone tools with symbolic art. Recently, however, scientific analysis has changed the older impression that stone tools were a lesser sign of intelligence. Along with difficulty in finding small spearheads, it has been even more difficult to show what cognition was needed to make these articles. New scientific methods are being used. For example analysis of the best tools from 10 sites between 284,000 to 7,000 years ago all show equivalent complex techniques used to manufacture the best tools of the era. Modern humans would find it extremely difficult to duplicate these tools. Not only were cavemen better tool technicians than modern people, they also have been shown to be able to draw four legged animals better than modern artists. They had plenty of additional time to learn.

Unfortunately, no one has found artifacts of ancestors from 8 million to about 3 million, when stone tools started to be found. It is possible these early people gathered food or their tools haven’t been found yet. More advanced tools were made 2.6 million years ago and even more advanced bifacial tools at 1.76 million.

As long ago as 500,000 years ago people were making advanced spears. Even Neanderthals, considered to be less intelligent than other homo species have to be re evaluated because 300,000 years ago they made bird bark glue fastening stone to wood handles. Other ancestors, 110,000 years ago, made engraved patterns on iron oxide, bone awls, hide clothing and shell beads. People 79,000 years ago were excellent pyro technologists and chemists. All of these feats show advanced cognition. 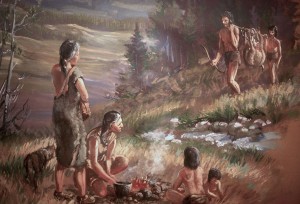 Another remarkable feat occurred 77,000 years ago when people made bedding that was specifically selected from very specific trees for the ability to kill insects and fungus. These people lived near a river with mosquitoes and such bedding was critical for survival. These same people also had snares for capturing antelopes, bows and arrows, new chemical compounds, and multi ingredient glues for putting stone points on wooden shafts.

New Findings This Past Year

The rate of scientific discovery is increasing in all fields. Despite the very difficult work involved, archaeology is no different. There were many significant findings this past year. 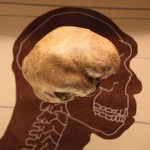 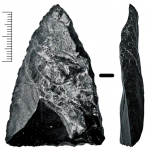 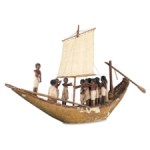 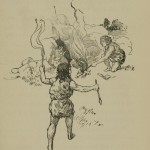 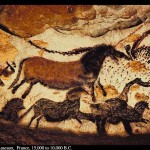 Until recent discoveries there was a popular assumption of “modernity” for current humans, that only recent humans are at a high level of intelligence. But, these recent findings show much greater intelligence in human ancestors, as long ago as a million years and possibly much longer. Certainly, there is no reason to think that people hundreds of thousands of years ago were any less intelligent than we are now.

Analysis of their activities has to take into account what they needed to do to survive and the size of the population. Innovation increases when there are more workers present to contribute. A relevant new concept is “behavioral modernity” implying there are many different ways to behave as a modern human based upon the situations that people find themselves in. What would modern humans do if stranded on a desert island? It is now understood that building essential high quality stone tools and travelling on the high seas can be as significant a cognitive development as symbolic art.

The early theories tied intelligence to 40,000 years ago in Europe when many new inventions appeared including necklaces, paintings, and better tools. The theories attempt to correlate this with specific mutations. But, new data shows many significant inventions are much older.

Every living group has its own distinct circumstances. Attempting to determine what human ancestors’ living conditions were for specific theories of the evolution of modern behavior is extremely questionable. There is really no way to understand the exact circumstances of all of our ancestors through current archeological data, comparative primate behavior and observing existing native people. In reality there were many very different environments where ancestors lived. Recently, these theories called “paleofantasies” are noted to be unjustified across a wide range of peoples and behaviors. 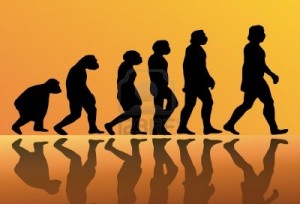 Many current human evolution theories need to be questioned. Despite the fact that vast quantities of refined sugar and processed foods can create big health problems, other “diseases of civilization” are not clear. Heart disease and cancer have been seen in ancient ancestors’ remains, even though ancients had much less longevity. It is really not understood what people ate in these numerous circumstances over millions of years before farming. Some genes did change over 10,000 years such as lactose digestion, but many others have not.

It now appears that ancient human ancestors had intelligence much like ours today. One set of behaviors, such as art, does not define cognition. It is also not clear what the implications are if people lived such a long time with modern intelligence.