Quantum mechanics is a successful and accurate description of nature at the microcosmic level.  Its existence allows for the development of lasers, transistors and virtually all of our high tech gadgets.

Because it does not permit a direct cause and effect determination of exactly what will happen, rather being based on a statistical view with many different possible outcomes, optimists wonder if this flexibility could help explain free will in a molecular universe.

Our Role in Quantum Mechanics

There are aspects of this weirdness that some believe necessitates the presence of a conscious observer as an integral part of the universe, and this spawns consciousness theories.

An observer, for example, affects the outcome of experiments, as to whether light is functioning as a wave or a particle.

Also, the wave function (mentioned above as part of superposition) only gives a specific reading on where a particle is when an observer questions its location.

There have been theories relating quantum effects to brain function and mind, but they have all been severely criticized because it has never been possible to prove quantum effects in the world of biology.

Quantum Mechanics in Plants and Birds

Very recent evidence shows quantum mechanisms in both the algae and bacterial forms of photosynthesis. Photosynthesis, one of the most important reactions in life, is how plants use sunlight, Co2 and water to make organic material.

The photosynthesis process uses an extremely complex set of molecules. When light randomly hits one of the many antennae molecules of the system, electrons become excited and very efficiently jump between many large proteins to find their way to the reaction center. Because of superposition and coherence the electrons instantly know all the possible routes, and are able to choose the fastest and most efficient one.  This instantaneous intelligent process is perhaps the reason that photosynthesis is so effective in producing energy for life. 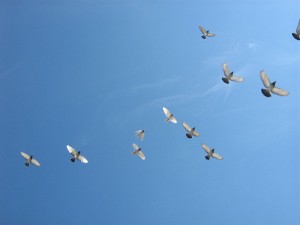 Another recently discovered quantum effect in biology is present in a birds’ navigation magnetic sensor, in the eye. Light hits the sensor that creates an entangled pair of electrons, one of which is affected by the earth’s magnetic field. The electrons fluctuate as a pair between different states, creating a molecule that directs the flight. 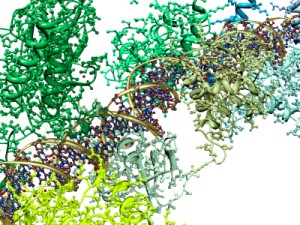 chemical theories.  A major complication is that proteins have different effects as their shapes fluctuate.  A significant quantum effect in biology involves cellular enzyme reactions where protons use quantum tunneling to move from one molecule to another as the protein shape changes.  This favors some processes by making the reaction much easier than having to overcome conventional chemical interaction energy barriers.

This field of quantum biology is just beginning with these discoveries.

Since quantum effects are now seen in organisms, what are the effects in the neuron and the brain?