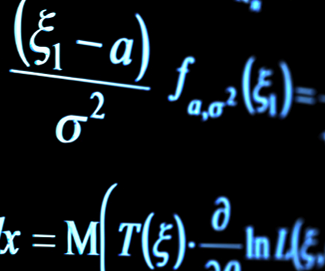 Mathematics has been called “unreasonably effective” in describing the physical universe.  In physics, mathematical equations are the basis of most important descriptions of nature including quantum mechanics, relativity, and thermodynamics.  Increasingly, fields like biology, chemistry, microbiology, and even the social sciences are also drawing on mathematics.  It is used to build buildings, bridges, computers, and many other creations.

But where does this incredibly accurate way to describe nature come from?

Even though it springs from the human mind, much of the mathematics that forms the basis of our best scientific theories is incomprehensible when directly compared to experiences of ordinary life.  Children learn numbers and arithmetic using simple, relatable ideas such as Goldilocks and the Three Bears, or a scenario involving the merger of two basketball teams.  But there is no way to make familiar analogies to the hundreds of pages of abstract equations that form advanced physics.  (see example of equations below)

The equations of quantum mechanics are extremely obscure, yet they create the most accurate and consistent descriptions of matter. These equations have allowed us to develop the lasers, transistors, and computers upon which we are so dependent.

A critical question is whether math is discovered or invented in the human mind.  Many mathematical structures were described long before there was any possible use for them in science.

When looking for mathematics to accurately describe his ideas, Einstein talked with the major contemporary mathematicians of the day to find types of math that were consistent with his ideas. Other pioneering quantum physicists utilized newly minted mathematical structures to build their unusual counter intuitive science.  But once the physical findings were described in a particular new set of equations, further analysis of the math alone led to some seemingly fantastic predictions: completely new ideas of how the physical world operated and previously unimaginable properties of nature that later proved to be true by experimentation.

“Antimatter” is an example of a discovery that was borne completely out of mathematics, and seemed completely impossible at the time. Antimatter consists of a complete set of ghostly particles each corresponding to an existing particle, e.g. a positron is the antimatter of the electron.  If a matter particle meets an antimatter particle they annihilate each other. The idea came from researchers puzzling about how an equation worked.  They posited that if one side of the equation was true, then the other side must be as well.  Later experiments proved it to be true.

In addition, other equations in quantum mechanics have produced many bizarre concepts that later appeared to be true—although they are impossible to comprehend.  A well-known example is the proven fact that matter is both a wave and a particle at the same time. This inconceivable, but true, idea came from the math and was later proven in experiments.

Possibly the answer to our question is that some of the math is invented and some is discovered.  If it is discovered, where do these mathematical ideas exist in the universe and how does the mind perceive them? If it is invented, then how does the mind create tools to so accurately describe the tinniest and largest objects in the universe?
Only one thing is certain: mathematics occurs in the human mind. Therefore, what does this say about the relationship of the human mind to basic physical reality?