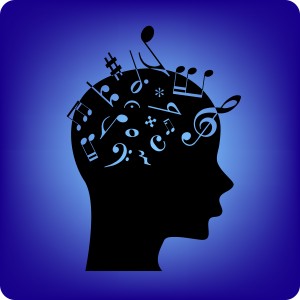 With our multi sensory brain, music harnesses powers of nature, culture, and mind. How much is the brain changed by the effects of music training and neuroplasticity?

Music is one of the most demanding cognitive and neural challenges, requiring very accurate timing of multiple actions, precise interval control of pitch not involved in language, and multiple different ways of producing sound. Auditory and motor actions influence each other in a constant interplay, which is largely unknown. 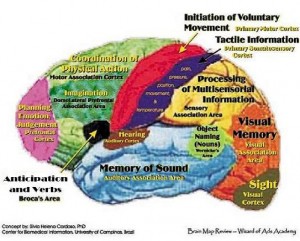 All brain imaging is done in a time scale of seconds, but the brain functions in the scale of milliseconds. Imaging studies do not really correlate exactly to mental states (see post on limits of imaging). Because of this limitation, a major way to study specific regions of brain related to music has been study of brain lesions.

But, recent research shows that when studying infants these differences do not necessarily exist. In infancy there is much more overlap of music and language in the brain.

What Is Known About Music in the Brain?

Perhaps some generalizations can be made: 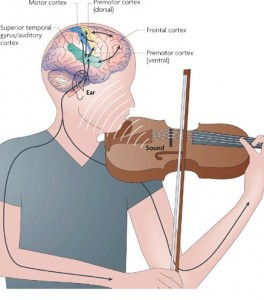 Pitch – Different factors of a tune -contour, specific interval size, duration of notes, ratios of tones – are processed in different circuits throughout the brain. The right hemisphere does tonal processing.

Musical imagery is analyzed in regions of the frontal lobe.

Singing is dominant in right temporal lobe, while syntax of speech and music is left dominant.

Rhythm, Melody and emotion work in different parts of the brain

There are multiple different streams of neuronal activity for auditory processing pathways – the dorsal and ventral streams are important but especially dorsal with parietal and premotor cortex.

All neural systems – motor, sensory, emotional and analysis – are active in both performers and observers. Listening, as well as performing, use both motor and sensory systems, since observers trigger the muscles that are being utilized by the performers and dancers they are watching.

Recent studies show that learning absolute pitch, a very measurable skill, occurs only with genetic ability plus training before 12 to 15.

Speech and music brain centers may have evolved in animals for accurate evaluation of environmental cues, perceiving pitch in noise.

Recently, research has assumed that understanding speech needs rapid evaluation (milliseconds) of muscles of lips and tongue in a rough way. A very recent study showed that the coordination of even the simplest syllables of speech is extremely complex, a symphony of neural circuits.

Music would need fine-grained interpretation of pitch (seconds) in a slower way.

In this hypothesis, speech (rapid movement of muscles of lips and tongue) is primarily organized in the left-brain, and music, needing a slower, more accurate, fine-grained interpretation of tones, is in the right-brain. 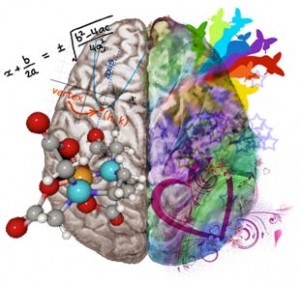 But, in reality music uses both right and left, using two parallel systems.

Because of much greater overlap of music and language in infants, an entirely different view has recently been put forth that language exists and develops as a specialized type of music. For this view music is defined as a generalized creative ability with sound elements – such as timbre, rhythm, and pitch.

There are many reasons to adopt this new view: every healthy person appreciates some sort of music; infants don’t show the same left-right separation until much later; appreciation of music timbre actually needs millisecond activity as well as speech; and children show language-brain development and music-brain development are parallel for many years. If you would like to boost your child’s brain development, and want them to take up piano or keyboard lessons, then Amidio have a guide to help you find the perfect keyboard for beginners.

In western society, people are segregated into musicians and general population, whereas in many other societies everyone performs, sings, dances, and listens. This difference has biased studies of infants in the west when comparing music and language development. 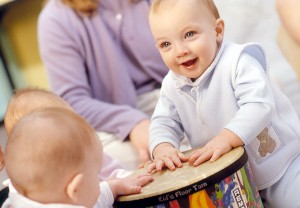 They learn regularities of sounds in speech as well at a surprisingly young age. 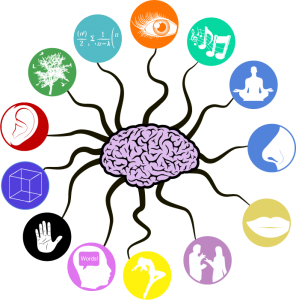 In the previous post, it was noted that the brain is very prominently multi sensory. Since the brain integrates so many functions, multi sensory training is critical in childhood. Feed forward and feed back loops are important connections from one modality to another. When a finger touches a piano key, there are connections from touch, auditory feedback and muscular control. In speech, muscles produce words, and feed back analysis of the speech occurs by listening.

With music inherently multi modal, music is the ideal brain training for children.

Music is a model of plasticity because of the multiple systems and the unique effects. Music training has wide ranging effects in many capacities related to perception, performance, and language with increases in brain efficiency and fewer neuronal units needed to encode information. 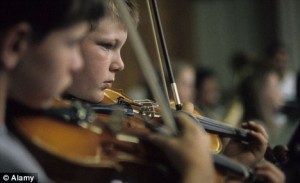 Training affects brain structures more strongly as a child. When the training begins before age seven, neural systems are created that last a lifetime. Random samples show structural changes in auditory and motor regions in 15 months of training in children.

Adult training also causes permanent changes in brain structure, but to a lesser degree. Even in old age these changes can be made in weeks of practice. Changes in brain function can be observed even within three hours of training, but without continued training, short-term changes are reversible

Different types of musicians develop specialized skills: pitch in violinists, timing in conductors, timbre in conductors and composers. Singing is beneficial as a tool because it stimulates basal ganglia and cerebellum as well.

Rhythmic tapping added to other training is especially powerful.

Brain effects are stronger if sounds are associated with a movement or a behavior and with rewards. 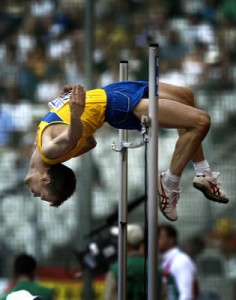 The brain responds better to multiple modalities of sensory and motor systems with music and any other complex skill. For example a recent study of using visualization of high jumping attempts showed that using the imagery helped 35%. But, if a simple hand motion is added to the imagery it increases the success rate to 45%.

One way to show the effect of music training on the brain is to see what trained musicians’ brains look like compared with untrained people who just enjoy music. 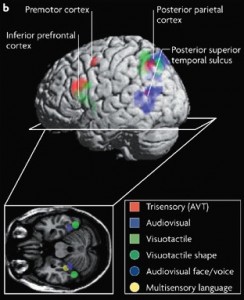 Trained musicians have greater volume in auditory cortex especially Herschl’s gyrus and the intra parietal sulcus bilaterally, related to better pitch perception. They have more concentration of cells in the motor cortex, hands for piano and hand digits for violin players. They also have bigger corpus callosum, the tract combining right and left-brain. Musicians have larger grey matter in the cerebellum and cortex regions of motor, auditory, and visual spatial. The EEG response is increased in cortex and brainstem. 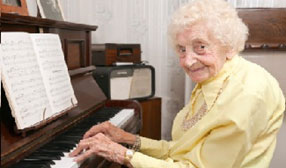 But, even very old musicians can develop new skills, just as research in 90 year olds showed that weight lifting had definite effects on balance and strength. Very old musicians can continue to perform despite the complex demands on motor, visual and auditory brain functions needed.

Changes in higher order cognitive functions can occur in days, weeks and years.

After training in childhood 1 to 5 years, adults increase brain response to complex sounds. They are more able to hear the fundamental (lowest frequency in a sound,) crucial for speech and music perception. These people also hear better in noisy places and are better listeners later in life.

Those who played instruments for ten years stayed better cognitively. The benefit was not reliant on continued play.

Tinnitus has been an intractable problem in treatment, but there are experiments with new approaches using neuroplasticity to reverse it. In one study, a favorite piece of music is altered to eliminate the specific frequencies of the tinnitus and is played often to retrain the brain. 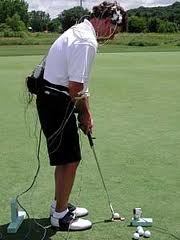 Dystonias are one of the most devastating negative neuroplastic events, where a malfunction occurs in over used muscles for highly skilled tasks. These dystonias are called Yips in athletes, and Musician’s Cramp in musicians. But, they are not simple muscle cramps; they are a high level breakdown of the neuronal circuits related to a very complex task that has been highly trained. For example, they do not occur in practice, but only in a concert, or competition. The same muscles work fine for other tasks such as writing checks.

Promising treatment approaches for Yips and Musician’s Cramp involve re-aligning the neural circuits, or body maps with retraining, the way phantom limb has been treated by tricking nerves, using a technique where a mirror and a fake limb make the brain think the phantom limb is moving.

Exercise and fitness have wide ranging effects on health and coordination. Metaplasticity is a brain change from training that allows efficient learning and plasticity in other areas than the primary training. Music appears to be uniquely able to induce metaplasticity.

In the same way music training changes auditory brain systems for music, these changes transfer to other domains including speech, language, emotion and general auditory processing. It allows allows for better ability to learn auditory, tactile and motor skills, as well as the ability to use abstract rules.

There is a wide range of clinical applications for musical plasticity. These are just examples: 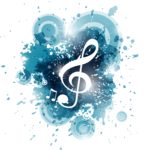 Previous posts have described the unique ways that music taps many regions of the brain simultaneously and uses and improves a wide range of capacities. The multi sensory nature of music stimulates unique neuroplasticity, including improvement of brain capacities unrelated to music such as learning new sensory and motor skills, and abstract concepts.

The next post will address the unique effects of musical improvisation and it’s relation to meditation and spiritual experiences.