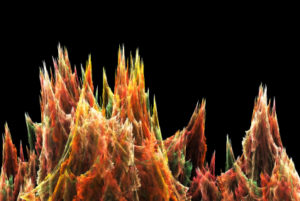 One of the major current theories of consciousness is that brain oscillations, also called brain waves, correlate with specific mental states.  It is the synchronous waves from different regions, that is, those that are beating at the same rate, that are believed to be important for the connection of different brain regions.  Brain waves have been observed for more than a hundred years, but it is still not clear exactly what they are and what they have to do with the function of the brain and the mind. 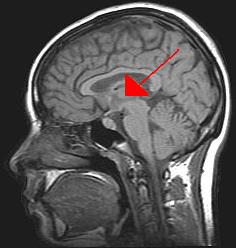 Oscillations in the brain occur because of an interplay between two forces, such as stimulation and inhibition. This dynamic can either come from two different cortical layers or a cortical and subcortical layer.  Feedback properties affect the oscillations by either continuing the give and take of the two forces or changing them in various ways. Even with no outside input, the brain creates spontaneous oscillations; a well-known example is the one, connected to the thalamus and cortex, that occurs during sleep.  Currently, it is believed that these oscillations help to synthesize and filter the previous day’s memories. While these oscillations are associated with sleep, most other brain oscillations are not clearly correlated with mental states.

Waves Measure Millions of Neurons at Once 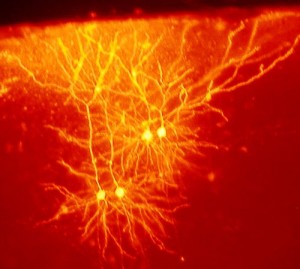 membrane.  Loops of neurons, such as those involved in a sensory input-muscular movement loop, can also create oscillations. Local regions of the cortex have oscillations.  Interneurons, which connect different brain regions, have the most visible oscillations.

However, we cannot yet measure individual neuron cycles.  The brain waves we can measure are the sums of millions (or billions) of neurons sending electrical signals at the same time and direction.  The four best-known frequencies of brain wave are alpha, beta, gamma and theta.  While each appears to be associated with different mental states, it’s unclear why or how. Also different studies show different waves for the same cognitive activity. The most well known are theta waves, produced by the brain centers for memory and emotion, specifically regions that seem to be related to the brains calculations of exact locations, time intervals, and future directions.

Two recent findings increase the likelihood that oscillations are related to specific mental states.  The first (surprising) discovery was that of a nerve, clearly related to memory, in a fly’s brain that was in a different location from the genetic and molecular requisites for stabilization of that same memory.  Effectively, this implies that memory is not local but distributed, involving multiple brain sites that must connect from a distance, possibly by synchronized oscillations. At least, this is true for flies. 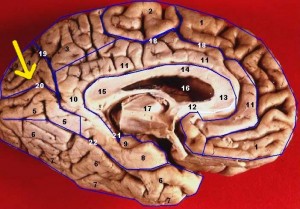 The second finding is one in which visual memory in monkeys was clearly related to a synchronization of theta wave frequencies between two different regions, a visual center and a prefrontal memory region.

However, there are some confounding variables.  For the same cognitive process, different studies show very different wave frequencies.  Despite this, the most recent research seems to support the notion that synchronous waves represent the “fingerprint” of the communications between different brain regions as they make the calculations for cognitive processes.

More recent research further complicates the picture. fMRI studies track blood flow in a region and are only sensitive in time to frequencies below 0.1 Herz.  With MEG imaging, which can sense a broader range of frequencies up to 100 Herz, it was noted that, possibly to avoid interference, there were multiple different frequencies for a single event. For example global hubs were in 4-6 Herz range, while lateral parietal areas were in the 8-23 Herz range,  and sensorimotor were 32 – 45 Herz.  In fact, it has been noted that the brain operates in vast synchronous distributed networks where many different things are happening in many places at once, in differing times sequences, and sometimes for a long time sequence.

The Waves That Correlates With Consciousness 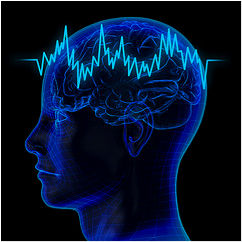 How information is synthesized to form our subjective experience is one of the biggest problems in understanding consciousness. Effectively, we synthesize input from all over the brain in an instant. For example, when holding an apple, we put together its shape, color, texture and smell to create our impression of the apple.  In the search for a neural correlate of consciousness, researchers have spotted alpha waves when people calmly wake up.  Gamma waves seem related to waking states, but also to paying attention.  Some researchers hypothesize that synchronous gamma waves from many places in the brain combine to create the unified subjective experience.  In this way, neurons performing different tasks in separate regions of the brain can share in a single activity instantaneously. In theory, different small waves combine to share in a larger, brain-sized wave.

While it may be proven one day that the gamma waves allow widespread parts of the brain to communicate, it is not yet confirmed. Also, it is not known what could create this synchronicity. One of the biggest problems in explaining consciousness is called the binding problem.  What binds all the disparate data, analysis, or oscillations together to form one unified subjective experience? Even if we knew that specific oscillations were occurring synchronously in many parts of the brain it still would not be known what is pulling them together. Is it the mind that pulls these oscillating regions together into one experience?

Even more importantly, there is still no way to conceptualize how electromagnetic waves related to the interplay of neurons could create subjective experience.