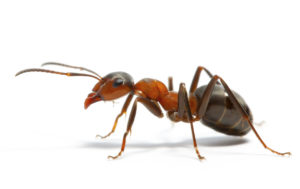 Like bees, ants are often considered to be mindless cogs in a machine—the hive, or colony—that somehow possesses its own intelligence.  This kind of intelligent society of insects has been called a “superorganism;” the internet would probably also qualify for this.

Mathematical scientists have looked for self-organizing principles whereby each ant passes on information to the next.  These theories assume that ants function like a computer, through rapid interactions and distributed processing.

Yet this does not explain the variety and intelligence of their response.  Perhaps—once again—we are considering an animal to be a computer, rather than looking at the unique intelligence it demonstrates.

From recent research it is certainly possible that individual ants possess intelligence as well as some remarkable group behavior.

Recently, it was shown that ants are able to perceive threats of varying degrees and adjust their responses—e.g. how much energy to expend, or how aggressive to be—accordingly.  Ants are noted to respond rapidly to new circumstances. For instance, if food is discovered, more ants will be sent to this location within minutes. If the nest is damaged, many workers will swarm to fix it immediately.  This process involves more than just touching each other, more than a computer calculation: it requires the knowledge that the hive has to be repaired and the specific materials that are necessary.  A very recent study has shown that individual ants can learn to use completely novel information in the form of magnetic and vibrational information using landmarks of navigation back to a nest. In other words, ants are able to evaluate a situation and respond appropriately.

To determine a new location for the hive, ants undergo a competition, which is similar to the bee’s waggle dance described in a previous post.  Individuals ants each advertise a variety of potential sites with some ants choosing the same site.  When a quorum is reached for a specific site, the vote is concluded; all the ants return to the nest to begin carrying worker ants, young ants, and the queen to the new site.

Very recent research has shown that when separated from their hive, ants take advice from their more experienced individual brethren, scout ants who had memorized other good locations, about the rebuilding of a new home.  It appears that ants are led by the smartest of the bunch, not by a mysterious “hive intelligence.”

But, perhaps, one of the most remarkable tricks of the insect kingdom belongs to the fire ants.  In experiments, when these ants are thrown into water, they quickly use their claws and jaws to grip the feet of other ants, forming a woven lattice of bodies that is completely water-resistant: a living raft.  Despite the tightness of the fit, the ants position in the rafts allows each one to breath trapped air.  These rafts, which can remain intact for long periods of time, allow the ants to safely traverse water or escape floods.

The Individual in Society

It has yet to be shown how these types of behaviors can be pre-programmed. Ants clearly act as individuals and exhibit leadership.  But, groups of ants can do remarkable feats together such as the fire ant raft.  The question of the intelligence of the hive versus the individual remains unanswered.  If there is a type of intelligence in the aggregation of organisms, perhaps it is worth asking: What kind of superorganism are humans becoming, especially with the advancement of the Internet?