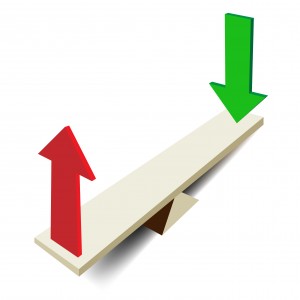 The decrease in cancer appears with many major neurological diseases such as Alzheimer’s, Parkinson’s, Huntington’s, Down’s syndrome, and multiple sclerosis, as well psychiatric illnesses schizophrenia and anorexia. There are a variety of different tumors that occur less frequently with these neurological and psychiatric diseases, such as smoking related tumors—lung, colon and bladder cancer—and a wide variety of solid tumors, lymphomas and prostate cancer. 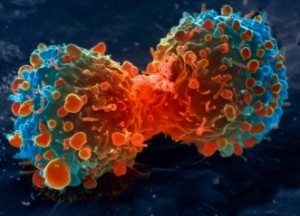 A previous post demonstrated that cancer cells, like microbes, have significant communication within their community of cancer cells, as well as decision-making abilities at least as good as microbes. But, cancer cells are vastly more complex than a microbe. Is this relevant to the brain-cancer connection? A recent article of mine in Scientific American Mind demonstrated how the nervous and immune systems are really one with two components—a wired component for fast communication, and a wireless component for hard to reach places. Is the intimate connection of the nervous system and the immune system critical for the inverse relationship between cancers and brain disease?

The first discovered association between cancer and brain disease was Down’s syndrome being somehow related to less leukemia and GI cancers. Then, later it was learned that many brain diseases have associations with less cancers. Some relationships show both decreases for some types of cancer and increases for others such as schizophrenia with less prostate cancer, but more breast and lung cancers. 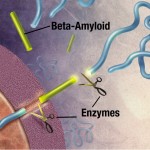 A significant amount of research has occurred related to cancer and Alzheimer’s disease. It has been shown that the association with some cancers and Alzheimer’s is reciprocal: more cancer, less Alzheimer’s; more Alzheimer’s, less cancer.

In Alzheimer’s there is an abnormal deposition of a protein called amyloid beta, forming large plaques outside of the neurons. It is not really known whether this deposition is a cause or an effect of the disease. Many other events have been identified and people with amyloid beta in their brains aren’t necessarily demented.  Some think that the normal mechanisms that clear the abnormal amyloid beta are faulty. Amyloid beta is a byproduct of an important process involving several large complex enzymes built with multiple subunits — β-secretase and γ-secretase — which may be implicated in this process. 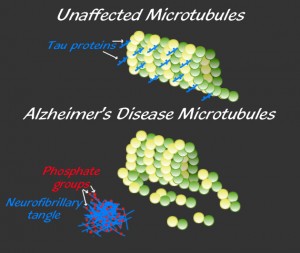 Another major hallmark of the disease is an abnormal excessive tangling of another protein called tau, which is an important component of the microtubule system in the axons (see post on microtubules).

One of the most well documented risk factors for Alzeheimer’s is an abnormal gene that is used to manufacture apolipoprotein E (ApoE), which is an important transporter of cholesterol in the brain and the rest of the body. In the brain ApoE is produced by astrocytes and transports cholesterol to neurons via ApoE receptors. This process appears to be connected with both cancer and Alzheimer’s.

A further piece of this puzzle is the vital cellular mechanism of programmed cell death, termed apoptosis, which is utilized by cells in a variety of situations. This process occurs when cells are defective or unnecessary; the cells are cleanly disassembled in an orderly process creating no scar while reusing the materials. This mechanism is utilized by the fetus to prune 900 billion neurons; it, also, occurs normally in many different circumstances when the body wants to remove a cell. Another term for programmed cell death is autophagy, eating oneself, and has been associated with many diseases. This process is also related to ApoE.

Apoptosis, or autophagy, has been related both to degenerative neurological diseases and to cancer. The process of cell death is connected to cell proliferation in cancer by general activation of the processes that create or destroy cells. For example, there is increase of some apoptotic death of lymphocytes, resistance to skin cancer, and reduced destruction of brain cells in Alzheimer’s. This seems to imply an abnormal regulation, causing cell death mechanisms to go in the opposite direction. P53 is a major factor for cell-death and seems to interact with gamma-secretase while it is metabolizing amyloid, which might cause less cancer. There are multiple other possible mechanisms, however.

By apoptosis, or other possible mechanisms, the enzyme γ-secretase is involved in both cancer and Alzheimer’s. Also, APOE4 reduces clearance of the abnormal proteins and affects cancer in an unknown mechanism.

Another possible relevant mechanism is that micro RNAs are abnormal in Alzheimer’s, Huntington’s, and Parkinson’s and they might suppress tumors.

There appears to be an important relation of Alzheimer’s and diabetes but it has inconsistent effects on cancer.

The brain uses glucose in a unique way and is very dependent upon it. Alzheimer’s patients appear to have more insulin resistance. People with diabetes appear to be at higher risk for Alzheimer’s. Diabetes damages blood vessels, which would increase vascular dementia, and this could increase the Alzheimer process.

Therefore, would a low glycemic diet, with whole grains and no refined sugar, protect against Alzheimer’s? Is Alzheimer’s a form of insulin resistance in the brain, or in other words diabetes of the brain?

The cause of schizophrenia has not been determined because the findings are very complex, potential mechanisms and genes overlapping with multiple other psychiatric illnesses. Overall, schizophrenic patients and their family members have less cancer. Schizophrenic patients have more breast and lung cancers, and less prostate and skin cancers. Many different factors have been researched such as psychiatric medications, lifestyle issues, smoking and alcohol consumption, and poor health care. 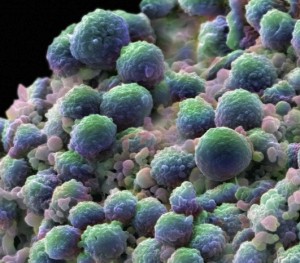 There are genetic links of schizophrenia with p53, the already mentioned critical factor that regulates the cell cycle, repair of DNA, and apoptosis (programmed destruction of cells.) But, p53 is also integral to creating new neurons and blood vessels in the brain. It suppresses several major pathways related to cancer. Importantly, the p53 gene (TP53) is associated positively with schizophrenia and negatively with lung cancer.

This implies that the factors that suppress cancer, also increase schizophrenia.

Another factor, OLIG2, regulates cell life and death in the brain for oligodendrocyte glia cells and also controls the multiplication of neural stem cells, which can become brain cancer. This same factor is implicated in abnormal brain activity in schizophrenia. 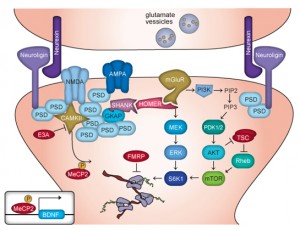 Another factor appears to be neureglin 1, the critical extra cellular matrix protein that helps hold the synapse together (see post). It also helps with neuronal adhesion in migration and plasticity. Importantly, the gene for neureglin 1 is related to schizophrenia and to several cancers, breast, pancreas and colon.

Another complex set of circuits relates to the processes that create new brain cells and cancer. The enormous complexity of the nervous and brain systems were discussed in my previous article. The most recent information is consistent with the nervous and immune systems being one, a hard wired component for rapid communication and a wireless component for individual cells that reach hard to get locations. Tumor cells also have back and forth communication with neuronal circuits, immune systems, and hormonal systems. 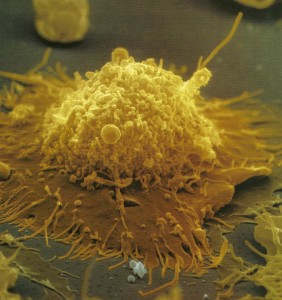 In one experiment animals were given “enriched environments” including better space, more exercise and more social stimulation, which stimulated the hypothalamic pituitary adrenal axis (HAS) increasing BDNF. BDNF has been discussed in a variety of different posts as a very important stimulus for new brain cells (see my Guest Blog in Scientific American Mind – Emotional Needs of Adolescents Stimulate New Brain Cells.)


Also, in this experiment adrenalin was increased and leptin was decreased. This hypothalamic stimulated BDNF decreased the development of cancer.

There are many other possible connections that are just now being considered. Dopamine is reduced in antipsychotic medications, which could reduce cancer. Smoking affects nicotinic acetylcholine receptors by enhancing other receptors that stimulate cancer. Some antidepressants appear to slow down colon cancer through neurotransmitters.

The immune system has a complex ability to both inhibit and stimulate cancer. There appears to be a balance that can be tipped in either direction. Tumor specific immune memory, once established, will continue over time to kill specific types of cancer cells. Cytokines from the immune system (gp130 family) communicate with neurons and glia to control brain development (see post1 and post2). But, they can also stimulate the opposite.

CD4+T cells produce acetylcholine, which stimulates the vagus to cause production of tumor necrosis factor alpha (TNFα), a critical factor for apoptosis and necrosis and cancer. Interleukin-10 is another important factor, which is increased in cancer and protects against degenerative brain disorders. 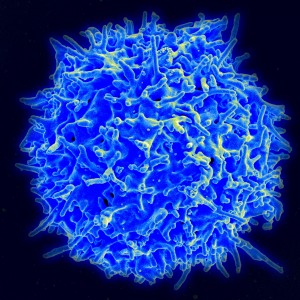 The basic cellular antitumor response is from dendritic cells that present antigens. There are many other specific cells, such as CD152 that specifically regulate tumors and autoimmunity. Like many processes these can work in both directions and potentially can attack cancer cells and neurons.

These are unusual neurological conditions that occur with cancers that secrete hormones such as ovarian teratoma, small cell lung cancer and breast cancer, and are caused by autoimmune destruction of neurons. The mechanism appears to be based upon the cancer having specific proteins that also occur in neurons, as well as the immune system attacking these neurons.

In the anterior hypothalamus, the body’s central clock for 24-hour rhythms is in the suprachiasmatic nucleus. This has widespread effects on behavior and physiology—and, of course, sleep, eating and mood. 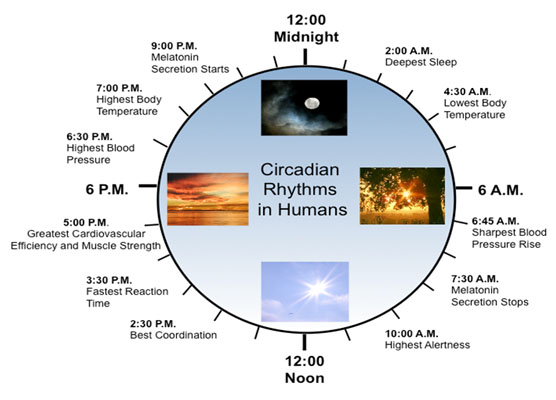 Problems with the clock stimulate several different cancers, especially those produced by hormones – night shift work causing 35% increase in breast and colon cancers. Night shift workers also have higher incidence of anxiety. The genes of the clock also affect dopamine in the midbrain, related to schizophrenia. A group of these genes, PER1 and 2 (short for period), have been shown to be involved in DNA damage control and production of tumors. The gene PER3 affects sleep and increases tumors including breast and colon, and schizophrenia. Another gene, PER35/5, is linked to breast cancer and bipolar disorder.

Melatonin is a natural part of the clock system produced by the pineal gland each night at the time for sleep. It is an antioxidant, affects the immune system positively, but is also known to be involved in pathways regulating new cells and cell death. Melatonin lowers leptin, suppressing cancer activity. It reduces cancers dependent upon hormones, and lowers the side effects of chemotherapy.  Therefore, one theory is that melatonin is a way that the brain with degenerative disease could control cancer. This would occur by altered levels of neuro-hormones including melatonin which suppresses cancer.

Thus, we have abnormal circadian chemicals involved in creating cancer and stimulating progression and metastasis. Other hormone-immune reactions related to brain disorders appear to decrease cancer.

A previous post shows that that the function of the brain, the hormonal systems, and the immune system cannot be separated at all. The complex chatter that occurs with immune cells and nerves is also occurring in different ways with cancer cells.

The complex mechanisms for stimulated cell growth and cellular multiplication can also turn the other way and kill cells, causing degenerative neurological disease.

As the remarkably complex molecular biological mechanisms of cells unfold, we can only marvel at how incredibly intricate the relations are between the major diseases. As has been seen in posts on memory, learning, and neuroplasticity, the regulation of the totally integrated nervous-immune-hormone system occurs simultaneously in brain-body wide circuits. Also, these circuits are highly connected with the action of the mind and subjective experience.