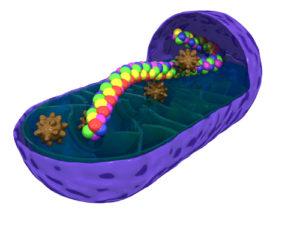 Scientists accept that today’s eukaryotic cells, which form all plants and animals, have parts (organelles) that were originally their own unicellular organism. This theory is called endosymbiosis. For example, one of the eukaryote’s organelles, the mitochondrion, was originally an independent smaller microbe. In fact, it was a member of the phylum Proteobacteria and a close relative to rickettsia (which causes diseases like typhus). Now, after hundreds of millions of years of integration into the larger cell, the mitochondrion provides eukaryotic cells with energy and much more. It is the cell’s powerhouse directing many important cellular functions.

Both Mitochondria and Chloroplasts Learned to Live in a Larger Cell

The mitochondrion is not alone in its endosymbiotic role. In plant cells, the chloroplast joined a eukaryotic plant cell even earlier, providing food and energy for the plant through photosynthesis. While most of the cell’s DNA is housed in the nucleus, mitochondria and chloroplasts continue to house some of their own, unique DNA. Over a long period of time the mitochondria and chloroplasts transferred important genes from their own DNA into the nucleus of the cell, which took over those functions.  A recent study in plants showed that this transfer occurred through direct migration of the DNA fragment into the nucleus. It is possible that mitochondria used the same technique. The mitochondria still have enough DNA to replicate themselves and perform the energy functions that are so vital to the larger cell.

While it used to seem counterintuitive that a microbe would give up it’s DNA, and therefore vital functions of survival, to another cell, recent research has shown that microbes, in general have the tendency to take the easy way out and transfer functions to other cells that it can depend upon. If the other cells will perform the function which they can access, it allows them to have less cargo. This is another example of the fundamental evolutionary principle of cooperation (see post on Social Interaction Affecting Evolution) where as soon as an organism can depend upon another symbiotic creature to perform a function, it can make it’s own journey easier by transferring functions. It is becoming increasingly apparent that symbiosis is very widespread, and there are now thousands of examples throughout all domains of nature.

In previous posts, microbes’ decision-making ability, communication, and group behavior were discussed. All three are a form of cognitive ability.  It might be assumed that similar microbe cells in ancient times possessed these same capacities, and that these capacities had an influence on evolution. Very recent research shows a very active life of the mitochondria inside of the neuron similar to its microbe roots.

As a result, it is shocking but not unimaginable that today’s mitochondria behave individually and in groups inside the neuron as microbes do. Are they still functioning with the same decision-making, communication and group behavior as they most probably displayed before they were integrated into the animal cells?

Vital Functions of the Cell Within a Cell

Inside our cells, mitochondria (MT), multiply by dividing in half similar to bacteria.  Unlike bacteria, though, they can also fuse with other MT in the cell for quality control described later. Some cells only have one MT, but neurons, which need lots of energy, produce many MT, often thousands.

Mitochondria are remarkable cell-like “organisms” in their own right, with extremely widespread influence in all aspects of the neuron.  MT are essential energy producers for many of the key functions of the neuron, including the movement and recycling of the vesicles that carry neurotransmitters, the assembly and movement of the structural tubules, the generation of electric charge in axons and dendrites, and the maintenance of synaptic plasticity.  They are needed throughout the neuron to provide the fuel.  It is not widely appreciated that they are also critical for the metabolism of amino acids, lipids, and steroids.  MT regulate the calcium levels in the cell which trigger the axon signal firing.  They also produce free radicals, and regulate the process known as apoptosis, whereby a cell is systematically dismantled without forming scars. Apoptosis, or programmed death, is the process that helps prune neurons.

Within the neuron, MT must move to areas of high-energy needs. For example, lots of MT are needed near the synapse and near the growth cones (the budding regions of the membrane that form new axons and dendrites in a neuron).  When broken , MT travel back to the center of the cell to be dismantled.  Currently, it is thought that several neurological diseases, including Huntington’s disease, Parkinson’s disease and Amotropic Lateral Sclerosis (known popularly as Lou Gehrig’s Disease) might be due to defective MT transport. There are many other diseases, including Bipolar disorder, Schizophrenia, and Autism, for which there is evidence of other defective MT functions.

So mitochondria must move through the cell to the hot spots needing energy and other metabolic functions. Interestingly, they move on microtubule tracks back and forth in opposite directions, starting, stopping, speeding up, and slowing down. At any moment two thirds are stationary, anchored by small tubules or off the tracks completely, while one third are moving.

To move, they can attach to a variety of motors that operate along microtubule tracks (see post on microtubules). Examples include the dynein motor protein, which moves the mitochondria toward the cell center, and the kinesin motor protein,

(see diagram) which moves the mitochondria away from the cell center toward the synapse (see diagram of different Kinesin motors KIF 1A, KIF 1B, and KIF 5)

.  MTs attach to these specific motors with adaptor proteins, in this example different KIF (for Kinesin Superfamily) proteins, that respond to different signals and circumstances. The protein adaptors (e.g. KIF) give MT flexibility in their movements.

Intracellular signals, often calcium or ATP, send mitochondria toward the neuron’s synapses.  At the synapses , MT produce ATP to help energize the transmission and buffer calcium, which stimulates the release of neurotransmitters.

As mentioned above the other known microbe now living in a cell is the chloroplast which serves the equally significant role in plant cells as the MT in animal cells.  It appears that chloroplasts also move in plant cells to maximize the use of light and other factors.  There is less known about the mechanism of their movement but it also involves scaffolding proteins at least including actin molecules.

Every month, half of our mitochondria are replaced.  This happens through the neuron’s quality controls; when mitochondria break, they are transported and destroyed.  One quality control occurs inside the mitochondria, where enzymes degrade or stabilize damaged proteins. In another method, healthy MTs fuse with a broken one and take over the broken mitochondrion’s function.  A third mechanism is fission, where a damaged section of an MT is broken off and eliminated by enzymes. In yet another mechanism, damaged MT produce reactive oxygen that triggers a programmed mitochondrial death.

What are the signals that direct MTs in their many complex movements?  Are they the same as the signals for their bacterial brethren? Direct communication between mitochondria in the cell has not yet been observed, (although cellular signals to the MT have been observed), but we are just beginning to unravel the complex mitochondrial story in the neuron. There certainly must be a way for  an MT to know where it is needed.

Does this organelle, like some microbes, still demonstrate independent cognitive abilities?  Are the thousands of MTs living in a vastly more complex neuron still their own microbe colony?