The microbe attempts to avoid being killed by the elaborate defensive mechanisms of not only the innate and adaptive immune systems, but also, the elaborate defensive mechanisms of individual cells. In the previous post, it was shown that the autophagy process was an important part of the individual cell’s response. Also, the cell itself utilizes immune factors. A very vital part of the cell’s response is dealing with vesicles both entering and leaving the cell, as well as entering cellular organelles. 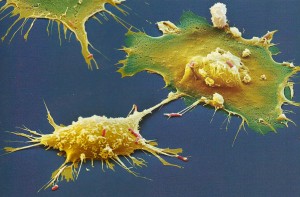 shouldn’t be there, and also danger signals that the microbe precipitates. Prominently, cellular defense techniques include tagging of the microbe or microbe material, building vesicles to capture microbes, and then involving the powerful lysosome destruction processes and the autophagy mechanisms in the cell. Other techniques are engulfment, production of immune cytokines (part of inflammation) pyroptosis (programmed cell death as part of inflammation), and help from the immune system with other cells.

The innate immune system, using white cells as first responders to entry of any invader, works closely with the individual cell responses. When the microbe is outside the cell, immune cells like macrophages whose main job is to chase and engulf microbes, cooperates with the complement system to catch and break open the microbe destroying it. Inside the cell, different compartments have different strategies.

It was shown that the cell uses the compartments of the cell to isolate the microbe, and then destroy it by chemical means or slow down its production by eliminating the necessary molecules for the microbe to make proteins and DNA. 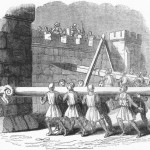 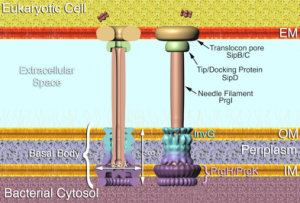 systems that allow the cell to destroy microbes; and direct alteration of DNA function to change proteins inside the cell, and create the microbe’s own machinery.

Meanwhile, the human cell has identified each of these secretory systems and has techniques to fight them.

The cell’s first attack once the microbe enters the cell is also the basic way that macrophages (white cells) engulf a microbe with a membrane. The cell then moves that bubble (vesicle) to the factories that break down molecules, called lysosomes. 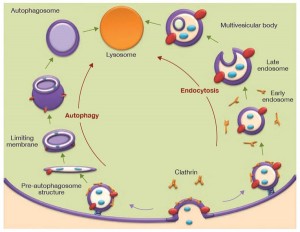 There are many different ways that bacteria and viruses avoid being engulfed. One example uses special proteins produced by the microbes to block the process. Another produces new proteins masking the proteins of the microbe that the cell would recognize. Both of these processes involve the microbe tricking the cell’s intake systems.

When in the cell, the microbe is able to break open the vesicle it was traveling in. Shigella bacteria has surface proteins that interact with the actin molecules inside the cell 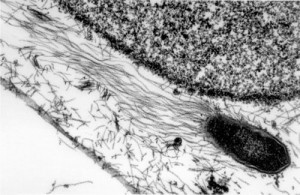 (tubules used for building structures and transportation tracks) and with these actin molecules makes a motorized tail to move about inside the cell.

The human cell recognizes the device that makes the motorized tail and triggers an autophagy attack. Shigella fights this attack using it’s secretory system, which sends another protein which blocks the autophagy recognition. Surprisingly, different bacteria have developed multiple different proteins for these two steps of building the tail and evading the autophagy. 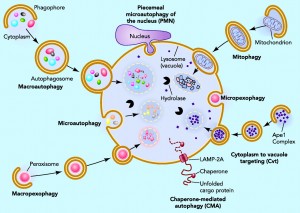 When the autophagy is working, the cell builds a structure called the autophagy initiation complex, which includes multiple large enzymes as well as a large vesicle called the phagophore. This vesicle grows larger and gradually surrounds and encapsulates the microbe. The surface of the vesicle has many markings that tag it for later destruction. 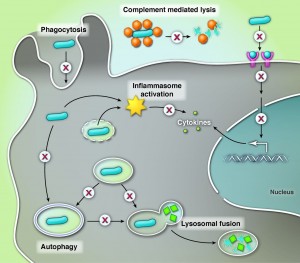 Multiple microbes have devices to counteract this structure. One takes material from the cell’s endoplasmic reticulum to build a counter structure, called a niche that protects the microbe from being surrounded. Another secretes a protein, which takes apart the surface markings of the phagosome. This process cuts a critical lipid in the structure of the markings destroying the structure. Not only does it destroy the marking but lit doesn’t allow it to be re assembled. There are many other specific ways that microbes attack the phagosome.

Once the microbe is successfully surrounded and placed in the phagosome, there are still other ways the microbes fight the process and actually replicate inside the vesicles. These 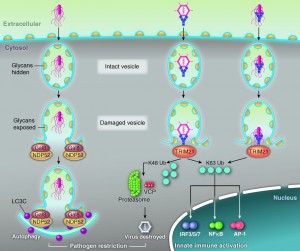 mechanisms fight the enzymes that are used inside the vesicles to take apart the microbe.

When the microbes secrete proteins, particles from the microbe are left floating in the cell. These are tagged and trigger the autophagy process. Microbes have specific secreted proteins to stop the tagging process for these particles. An important protein called ubiquitin often does the tagging. In response the microbe creates a de-ubiquitinase, that is an enzyme that tackles ubuiquitin. This process slows the entire process of autophagy by stopping the basic tagging mechanisms.

When an invasion is registered, the immune response sends phagocyte cells, such as macrophages, along with cytokine chemical messengers. These factors are produced in the nucleus after a cascade of signals (using NF-kappaB) down into the nucleus, where the factors, such as interleukin-1β and IL-18, operate. This signaling creates the receptors that recognize the molecules on the surface of the microbe both inside and outside the cell.

The microbes create proteins that interfere with the initial signal of NF-kappaB in multiple ways. One of them blocks a natural inhibitor of the NF signal. This inhibitor usually keeps this process in check until it is needed. Another microbe attacks the cascade further down near the nucleus. Both of these stop the immune system from sending help.

There are many other ways this process is attacked, such as stimulating leakiness in intestinal barriers which allow many more microbes to enter. Another microbe activates the system and then interferes with the process, essentially using the efforts of the cell against itself.

Attacking Vesicles by Building a Niche

A critical part of the cell’s defense is connecting the vesicle with a captured microbe and the factory that will destroy the contents of the vesicle. This destruction factory is called the lysosome, which fuses with the vesicle containing the microbe. One process uses the human cell’s own mechanism of keeping its complement in check. By altering this normal inhibition it stops the process of fusion with the lysosome.

Another point of attack for the microbe is the cell’s manufacturing of the vesicles. A secreted protein from a microbe stops the development of the vesicle and the fusion with the lysosome. Another technique destroys tubules that normally stabilize the vesicles by attaching to parts of the cellular membrane. In this process the microbe actually makes the vesicle a positive niche in which to survive and grow. ­

By these processes, the vesicle, or vacuole, becomes a home for the microbe, called a niche. Living in this vesicle niche, the microbe is able to secrete a variety of proteins that attract necessary materials from the endoplasmic reticulum (ER) to manufacture factors and cellular parts. 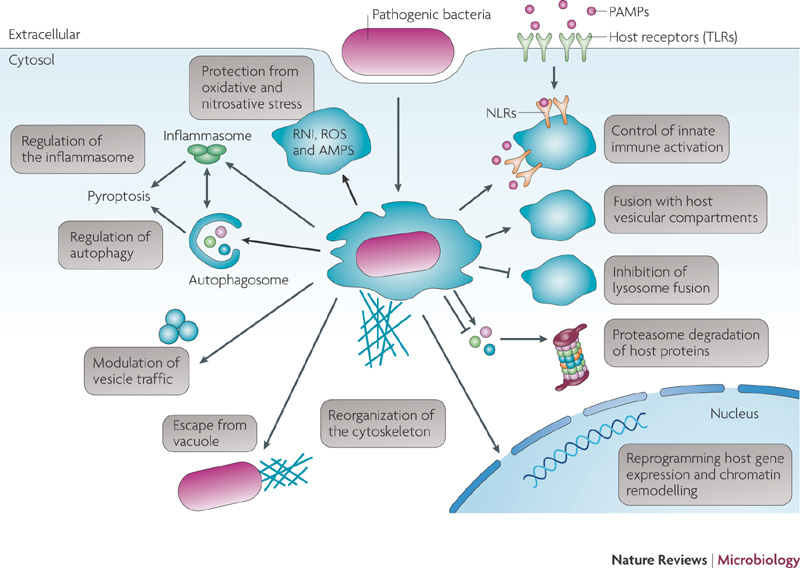 An entirely different technique creates membranous tubules (SIF’s or Salmanella induced filaments), that extend to the cell membrane and send chemicals to alter the attacks. Some microbes can build their own version of a vacuole connected with the human cells endoplasmic reticulum protein manufacturing systems. 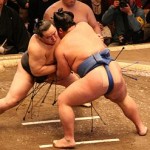 Recently, the SUMO system has begun to be understood. It exists in all human cells. This is a very complex way that modification occurs just after the creation of proteins from messenger RNA in the Ribosome. SUMO stands for “small ubiquitin like modifier” where ubiquitin is the basic known system the human cell uses to tag molecules for all kinds of purposes. This tagging is the barcode system of the cell, and these directions send molecules to various compartments to perform a wide variety of functions. The SUMO system is now known to be a 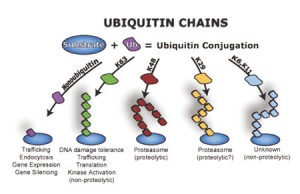 much more complex and broader way that cellular processes are regulated and altered.

One of the most important aspects of the ubiquitin system is to target material or microbes for destruction in the lysosome, phagosome system. It is now known that one of the basic ways that viruses defeat the cell is to alter the SUMO system. Future posts will elaborate on this recently defined critical system in the battle.

The eukaryote cell is a large complex mansion filled with compartments, passageways, factories, and elaborate transport systems with special tracks and motors. There are free floating symbiotic helper microbes called mitochondria that respond to the constant battle with microbes by providing energy. 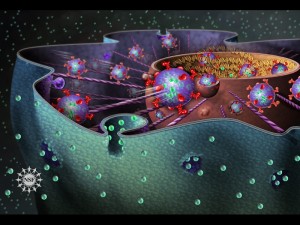 The cellular defenses start long before the invaders approach the individual cells. The microbes must thwart the innate and adaptive immune systems, with antibodies, complement, cytokines and large white cells chasing them. Once near the cell, they must counteract the defenses on the outside of the membrane. Once inside the cell, they need to be protected from the tagging systems, the vesicles built around them, and the destruction factors. Amazingly, microbes can subvert the destructive vacuoles and lysozymes, creating a niche to live inside of a vesicle, normally built for its destruction. Many are able to then travel to and through the nuclear pore into the nucleus. Inside the nucleus they alter the process that spools and protects the cellular DNA. Fooling the protective mechanisms they open the spools and have access to the DNA to insert their own and use it to manufacture vital materials.

Viruses, which might be the most clever of all microbes, having dropped much of their baggage to travel lite and fast, have learned to subvert the basic ubiquitin and SUMO tagging and regulatory systems. This battle between the microbes and cells is so elaborate and complex, with constant innovations, it is not reasonable to say this war is not between intelligent foes.