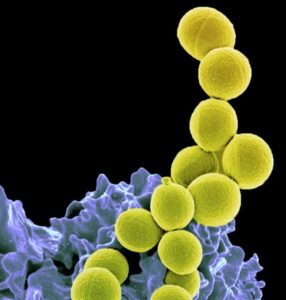 In the excellent book, “The Social Amoebae,” John Tyler Bonner, an emeritus professor of ecology and evolutionary biology, describes many social abilities of amoebas including communication, group activity, and individual and group decision making.  Do these raise the question of cognition in amoeba?

Some of their behavior is quite extraordinary. When food is scarce, individual cells join together and form a structure that functions as if it was a multicellular animal.  This slug-like creature, made of individual cells working together as one, crawls to a place with more food. There, the cells break apart, and form a new structure composed of a stalk and a fruiting body, with the appearance of a plant. The cells in the fruiting body live on by separating from the stalk and flying in the air, like a seed or spore, or attaching itself to a moving animal, to transport itself to a new place to start the colony over in a new location with the possibility of more food. The cells forming the stalk altruistically sacrificed themselves, by becoming a dying part of the structure. These amoebas, which had been living individually, came together to function as a multicellular creature to increase their access to food, then reverted back to behaving as individual organisms. The communication necessary for such actions is extraordinary. How can they do this? 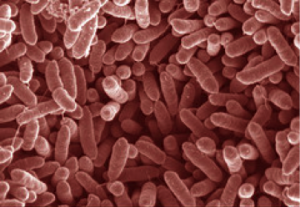 Another social activity carried out by groups of microbes is the forming of a biofilm. E. coli, one of the most studied microbes, is a loner when there is food available.  When there is no food, millions of these cells gather together in a close group by using their tails, called flagella, to move. After massing in this large group, each individual microbe sprouts a much larger, longer flagella. These large flagella then twist together into a mass. While secreting and then sliding on a gooey slime, this large twisted structure can move rapidly in search of food, for example in our intestines. 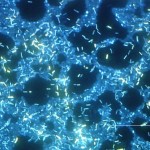 The slime is one example of a biofilm, which are now widely studied in nature. Biofilms grow wherever there is a moist nourishing surface such as in forests, the ocean, on oil slicks, and in animals. They can be formed from many individual microbes joined together, or as a large mass of disrupted cells that become an enormous blob of protoplasm with many nuclei.  Biofilms are often organized into complex civilizations, including farming, city-like structures and roads. Future posts will discuss the complexity of these microbe societies and their many functions in nature. 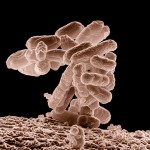 How can individual cells function independently at one point in time and then join together to behave as if they are multicellular animals, then go back to being an individual cell?  How can cells communicate well enough to live in biofilms? What does this say about the cognitive abilities of microbes? Do they have sentience? (See post on Sensory, Neuronal Aspects of Microbes.)

Future posts will discuss many other surprising capacities of microbes that raise the question of mental function, including elaborate communication, group decision making, and farming.