Wise Animals: Animal Studies Need to Be In Natural Settings, Not Lab 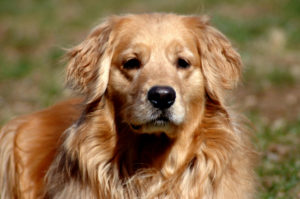 Previous posts discussed the increased scientific awareness of advanced cognitive abilities in animals both large and small, on land and in water.  Although animals other than humans have many intelligent qualities, can they really think, and do they have a complex inner life? Currently, it is not possible to study the subjective inner experience of human beings.  How much more difficult is it to understand the inner life of animals with vastly different sensory, and motor systems. Also, the fact that humans have come to dominate all aspects of the earth does not inherently diminish the unique characteristics of other animals. 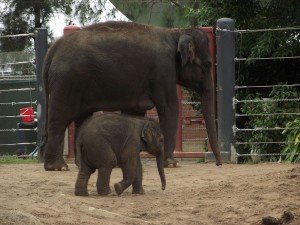 the natural responses of animals. In limited laboratory or zoo settings many animals are either not willing or not able to fully participate in an experiment any more than a person in a jail would contribute to research into very private personal matters.  There is also increasing evidence that intelligent animals in captivity such as primates, elephants, and dolphins have versions of mental illness and depression. A study showed that there is a big difference in survival of elephants in the wild and captivity, females living three times longer when born in the wild rather those born in captivity. While dogs are highly integrated into human life, those that are not treated well also develop psychiatric symptoms.

There are various technical reasons (specific similarities to human brains) as to why research neuroscientists have favored using mice, rats, flies and zebrafish for important research into brain mechanisms, behavior, addiction, and the effects of many medications. Recent research in these animals have shown the disturbing fact that many of the findings could be inaccurate because of the un-natural settings

hat have been involved in the study design.  Many of these results are then extrapolated theoretically to effects on human beings.

Recently it was noted that the housing conditions of zebrafish can have a major influence on scientific results.  Important recent research of mice in laboratories showed that providing a natural environment had an impact on the results of many unsuccessful trials of medication.  Even in experiments with flies, important differences are seen between their actions in laboratory settings and in the wild.  In one study in the lab flies followed circadian clocks but in nature they followed the natural light. A conclusion of the scientist was that not only are natural surroundings necessary for correct research results, but also for identifying what would be best for the animal.

This poses a challenge for scientific analysis of animals’ real abilities. Observing animals in natural settings is extremely challenging, particularly in a world of shrinking natural habitats.

While it is very difficult to follow animals in the ocean, recent research showed that male dolphins have an extensive network of open social contacts around the globe.  This level of behavior would be completely impossible to understand without natural studies. Knowledge of dolphins’ social capabilities would be terribly distorted in a laboratory.  How much more difficult are attempts to find out the extent of the inner world of animals?

Without being able to understand the human beings inner world extrapolation to other species is very speculative.  But, research about elephants and dogs, who can be carefully observed in natural settings seem to show advanced intelligence, perhaps even another species version of wisdom.

Elephants in the Wild have Advanced Abilities

Elephants are intelligent, with advanced communication skills and creative ability. They have the largest brains of land animals, averaging nine to 12 pounds.  They have an enlarged olfactory (smell) lobe, cerebellum, and temporal lobe of the cerebrum which make their brains inherently different from human beings. They live a long life and have a very keen long memory for friends and enemies.  It has been demonstrated recently that like humans, apes, and dolphins, they recognize themselves in the mirror.

They are able to use tools.  In the wild they modify branches by holding a branch in their 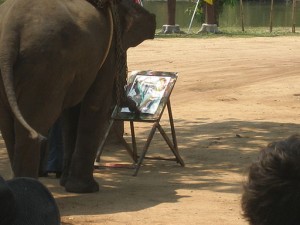 mouth and plucking off leaves with their trunks.  They use these for fly swatters.  They carry objects and sometimes their young with their trunk.  Perhaps their most remarkable use of tools has been in captivity.  Many elephants have learned to paint holding the brush with their trunks, and dipping the brush into a variety of paint colors in bowls.  As in any art, there are some individuals who demonstrate better ability, and this is the case with elephants’s abstract painting.

Observers have seen an elephant wince when one young calf extended his trunk near an electric fence.  Older elephants will drag calves who are stuck in mud.  They are careful to walk slowly with calves to ensure that the young are not lost. Studies have shown that older elephants are far better at determining who is a friend, relative and a stranger. Recently, a study showed that elephant matriarchs over 60 years old were much more able to determine a threat, even one from an unlikely source such as a lion who rarely attacks elephants.  Although these elders were not in front of the group, when they reacted everyone followed their lead.  Elephants mourn loved ones by returning to the body of the deceased for years to place leaves and sticks on the site.

In other research, three hundred elephants were closely observed for two years. The researchers discovered a complex social network, with many individualistic approaches to friendship. Groups of young elephants under 5 stayed together for the entire study period. Other individuals went from group to group, as they had specific friends in each group. Groups could be as large as 16. 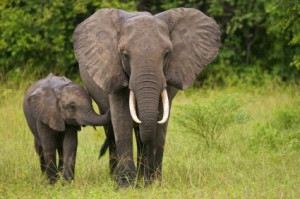 Elephants show many other characteristics of advanced understanding.  They can gather groups to help each other.

An example occurred when an enemy group spearheaded by one aggressive female kidnapped a young elephant directly from its mother, who did not have a large enough group to defend her child.  The mother of the child left, and visited several different elephant families.  She was able to gather a large group to come with her to confront the thieves and, by force of numbers, rescued her child.  Mothers show clear signs of grief with the loss of their children. They distinguish the carcass of a friend. Some studies find elephants can cooperate to solve advanced problems as effectively as crows, great apes, and dolphins.

Many stories testify to service dogs’ bravery and caring. But some show advanced intelligence.

One example of a dog’s ability to understand is provided in an excellent book about services dogs, Through a Dog’s Eyes (see Resources). A golden retriever service dog, Roxie, was trained to help a young respirator-bound man named Ben.  Roxie was trained that when an alarm went off she had to find Ben’s mother, Claire, who would then reset the button on the respirator. Roxie was never trained to reset the respirator.

One day Claire was outside the house talking with a neighbor when the alarm went off and Ben fell unconscious. Before he lost consciousness, Ben remembered seeing Roxie run behind the bed, which he described after the incident.  Later, when Claire came back into the house, the dog was very excited and brought Claire into Ben’s bedroom.  There, she found Ben awake. Ben described going unconscious and remembered Roxie running behind the bed.  Claire looked behind the respirator and saw that Roxie had  tripped the reset switch.

Claire also noticed that Roxie had badly scratched the front door, something she never did before.  Roxie, it seems, had learned to use the reset switch by watching.  When the alarm had gone off she tried desperately to open the door by scratching to call Claire. But when she couldn’t alert Claire in time, Roxie reset the button herself and saved Ben’s life. She was never taught how; she just learned it herself by observing Claire.

This is just one of countless stories of unusual intelligence and wisdom from service dogs, working dogs and military dogs.

Great Memory Capacity for What?

Another dog, Chaser, learned over 1000 nouns taught by his psychologist master. This achievement shows a great cognitive capacity.  This was done merely to show a dog’s potential capacity.

But what does this measure? Why would a dog want to learn so many nouns? Perhaps the measurement of Chaser’s inner life and cognitive abilities are not possible by human standards.

Many animals can plan for the future. Birds, chimps, whales, bears, and octopi all have been shown to do this.  Other posts describe plants and microbes that can plan and make decisions. So one can only imagine how capable are the advanced animals that show human-like wisdom.

In order to understand the brain, evolution, and the world around us, science attempts to learn about the inner lives of other species.  Currently, there is great difficulty understanding the subjective inner experience of human beings.

Will it ever really be possible to understand the inner life of an elephant or dog through human scientific evaluation?

Wise Animals: Animal Studies Need to Be In Natural Settings, Not Lab