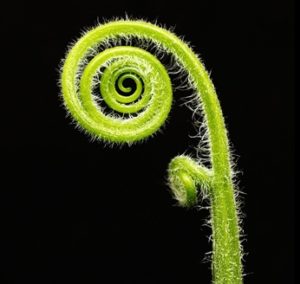 Plants exhibit elaborate problem solving, planning, communication, and defense in relation to other plants and many different microbe and animal species. They are a lot smarter than most give them credit for. Recent research continues to show their extremely unusual complex behavior. This plant intelligence primer and update will summarize current research—a few exceptional findings then summaries of extraordinary communication and defense abilities.

Plants make food from light. But, when there is no light, they must use their food wisely. Recently, it was found that plants do arithmetic division. Plants make their starch reserves last until precisely at dawn when new light will provide more starch through photosynthesis. They use molecular mathematics to regulate the rate they eat starch throughout the night. The only other creatures in nature known to do this are the animals that fast through migrations or hibernate, when they use their energy stores wisely to survive. 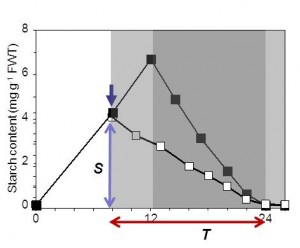 But, doing this in a cell is quite extraordinary intelligence. Experiments showed that if light was added at night, the plant recalculated the computation to take into account the new levels of starch and, again, used the new amount precisely until the next expected light at dawn. Specific mutations that alter the ability to perform this calculation, gene called PWD, are thought to help this arithmetic.

Plants form a memory, encode and retain it, and then recall it. The Venus flytrap remembers the first touch for 20 seconds by an electric mechanism so that it closes on the second touch of an insect.

Through epigenetics wheat remembers the time of winter and then starts to flower and send seeds. Some plants pass on stress experience through genes to future generations. 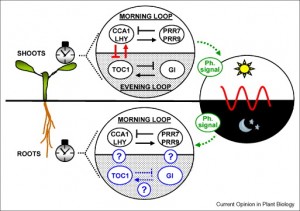 Part of the plant memory is due to the production of neuro-active chemicals such as glutamate receptors (some of the same receptors used in human memory.) Medications that affect human glutamate receptors, also, affect plants. The root may be the brain of the plant, receiving much of the sensory information and then using memory for planning and directing movement.

Plant cells have an internal circadian clock and produce sigma factors to trigger activity based upon the clock. It is now known that these factors, made by the plant cell, not the previuosly independent chloroplast, trigger the chloroplast genes to regulate the time of photosynthesis. 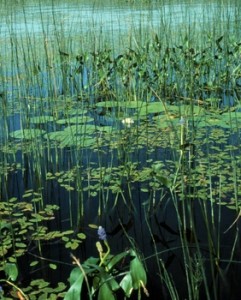 Recent research shows that marsh plants actively engineer their landscape to increase survival. They were able to change elevations by producing more soil and trapping and accumulating different sediments. Each species is actively involved in building up its elevation to the best range.

Phytoplankton, a marine plant, exhibits avoidance behavior. They are able to move toward light and nutrients. They, also, have recently been observed swimming away from predators.

Land plants can “see,” but microscopic plants, freshwater dwelling cyanobacteria, are able to see much better. In fact, these tiny plants have a light based communication system that is more complex than any large plants or simple organisms and “sees” four different colors. Water absorbs different light at different levels — far-red the best, 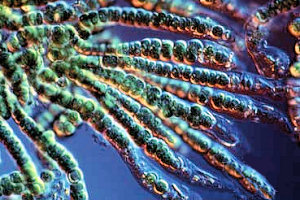 then red, and green light, but not blue. These small plant cells have dramatically different levels of light if they move up and down in the water just a few feet. Many different factors play into how they will utilize light for photosynthesis: time of day, depth, and competing organisms. On the photoreceptor proteins there are two sections that act independently in light sensing. These two regions interact and send information about the four colors simultaneously. In land plants integrating different light uses signaling from multiple different photoreceptors.

It is well known that plants respond to chemical contact, pressure, and light. They are able to monitor far red to see the effects of competition from other plants. Plants smell chemicals in the air.

Mimosa leaves close with touch. Sound and touch use similar mechanisms in other 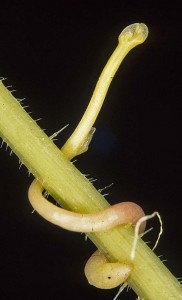 organisms and perhaps do as well in plants. In soil they respond to the chemical touch of toxins.

Plants have a taste for nutrients. The Dodder plant can’t do photosynthesis. So, it must find nutrients and it finds the best by smell and taste. The Dodder moves to the prey such as a tomato plant and measures the level of nutrients before attack. If there aren’t enough nutrients in that particular plant they withdraw and look elsewhere.

It is known that roots produce sound waves as do water channels in trees. It is possible that plants respond to these sounds. Plants respond to magnetic fields and gravity, although the mechanisms are not clear. Recent research showed that plants do not grow near a cell phone because of the radiation. Plant genes can respond to sound with rice responding to different frequencies.

Recently, a new type of communication between fennel and chili was discovered. Fennel, ordinarily, sends signals in the air to slow the growth of competitive chili plants. When all ordinary communication was blocked—signals were blocked including any light, smell, touch, roots, and chemicals—the chili plants still were able to sense the fennel by either sound or magnetism. Without the basil the germination was slow, but when seeds were able to communicate with plants it was more rapid. When totally separated, but near, the basil they still grew better being influenced by either sound or magnetic influences.

Internally, plants use electric signaling and signaling by water pressure and chemical messengers. They use proteins, hormones, minerals, nucleic acids, sugars, fats, and carbohydrates for communication. Each of these different types of signals triggers different behaviors.

Plants send signals between other plants by roots, by air and possibly sound or magnetism. The roots can signal by producing chemicals or through fungal wires. The chemical air route is more dependent upon weather and other conditions than the hard wired fungus channels. The previous example of communication between fennel and chili 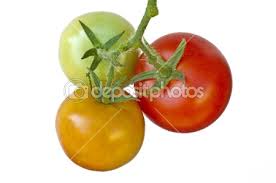 appears to be either through magnetic or sound signals.

Put ripe and unripe fruit together, the ripe plants releases pheromones in the air, which signals the unripe fruit to ripen.  When one fruit ripens, it sends out ethylene so that all the fruits in a grove will ripen together. 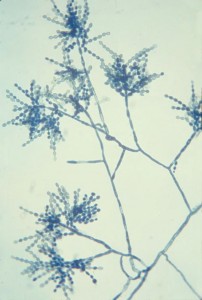 Fungus creates wires between most of the plants in the forest. These wires can go for miles. Fungal wires are used for messages and for nutrients. Plants are in constant communication by using these wires, and can encourage their use or cut them off if threatened. Using these wires, plants are able to send messages a great distance to other plants. Recent studies showed that when a predator attacks a plant, the signal along the fungal wires allows the other plants to prepare and protect themselves with defensive measures.

Microbes also are in constant communication with plants and are active in helping plants adapt to changing environments. One plant needs three different kinds of ants, two for pollination, and another to disperse seeds. 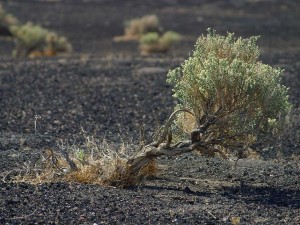 Sagebrush that is being eaten by grasshoppers, deer, and other predators signal their relatives (mainly) with chemicals in the air so that they can adjust their defenses. The communication to non-relatives is not as effective. 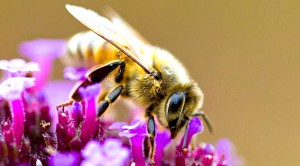 Microbes prompt plants to respond to environmental changes such as draught and other stresses. In this situation microbes drive plants to flower earlier and help plants grow and reproduce.

Complex Back and Forth Communication 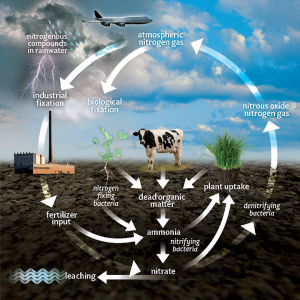 Perhaps the most striking plant communication is the very elaborate back and forth talk between legumes and bacteria or fungus to address the critical need for nitrogen fixation.

Nitrogen is critical for plant life. Most plants get it slowly from the environment 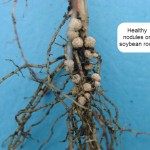 from the effects of  lightning and volcanic activity. A more efficient factory for nitrogen fixation is established between legumes and microbes by forming a nodule.

For fungus, a similar process occurs where fungus, after being invited into the plant, grows special branches called arbuscles inside the plant. These factories send roots to the outside to absorb phosphorus and other nutrients for the process.

These nitrogen fixation processes involve major modifications of the plant cells to facilitate the infestation and the factory. Complex signaling occurs at every stage, any one of which could end the process. A unique mechanism called “calcium oscillations” in the plant cell’s nucleus provides the signal, which becomes the pathway the microbes follow inside of the plant. Many unusual signaling cascades and unusual genes are involved.

This vital, but very complex, process relies on intelligence in the plant and the microbes and very complex back and forth communication.

Plants have a wide variety of defensive strategies including manufacturing many complex chemicals (terpenes, alkaloids, and phenols) and some plants even show future planning in these defenses. 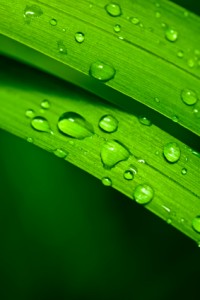 The mustard plant is able to predict the time of the dew in the morning and, more importantly, the time that a dangerous mold produced by the dew will attack. Just after the morning dew, at the very moment the mildew sends seeds flying in the air to land on other mustard plants, the plant synthesizes a powerful toxin. Previously, it prepared to synthesize this very unusual toxin, which ordinarily could kill the plant, to appear just at the time of the morning dew to avoid the dangerous mold that would otherwise threaten the plant. The toxin kills the spores as they land. The plant plans for this future event and times the synthesis to the exact moment.

Another recently discovered defense is used by crabgrass. Previously, it was thought that crabgrass outgrows regular grass because it is more hardy. But, it was recently found that Crabgrass actually makes a toxin to kill neighbors and therefore gains superiority.

Defenses Can Be Elaborate 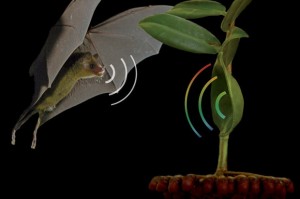 Within five minutes of a predator attack some plants release chemicals to repel or trap the predators. One plant looks like a sonar radio dish and returns signals from bats to alert them to find the plant to eat the pests. Some plants secrete egg poisons. Others stimulate tumors to grow near eggs and physically knock them off the plant.

Plants use special receptors to ward off fungi and bacteria, or make decisions that they are friendly. The outside receptors go through the membrane into the cell as well where signaling occurs. Outside of plant cells, RLP receptors combine with other proteins to warn plants about fungus attacks. Inside, if the situation is dire, the signaling will trigger cell death to kill the cell that will be taken over by fungus and, therefore, save the other plant cells.

When attacked by insects, plants produce toxins to influence the insect, but also send out odors to attract enemies of the pest.

A recent experiment showed that the fungus wires were used by plants attacked by aphids to communicate to other nearby plants both to release a variety of chemicals to repel aphids and, in addition, to attract wasps, aphid’s predator. Both the plants under attack and those that were in fungal contact produced the same chemicals. 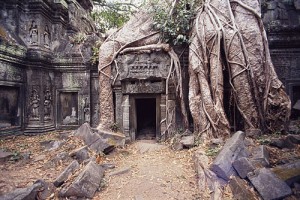 Taken together, these many different capabilities and behaviors show that plants do, indeed, have intelligence. They plan for the future, make decisions, move, evaluate, send complex signals and work cooperatively with other plants and with microbes. They have a wide range of senses and a wide range of behaviors, including manufacture of many rare chemicals for special situations.