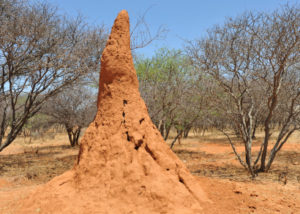 Previous blogs have described some of the more intelligent abilities of bees and ants. We have seen that bees can solve difficult mathematical problems—for instance, when sizing up the most efficient route to a flower.  Fire ants are able to demonstrate a most remarkable raft structure as well as individual leadership. And these aren’t the only brainy bugs: Fruit flies pay selective attention to new objects in their environment. A recent study showed that ladybugs, a beetle also called ladybirds, judge the plant quality that an aphid will like and wait for their food on those particular plants.

But the insect award for most advanced engineering must go to the termite.

Termites are fragile creatures.  They must stay moist at all times, so they cover their trails with dirt and feces.  They also make travelling tubes to protect themselves from ants and from the dry air.

Some species build a mound ten feet tall.  If a termite were the size of a human, such a structure would be taller than most skyscrapers.  The nest is a small part of this massive structure—only three feet in diameter near ground level, with special rooms for the queen and the nurseries. In addition, they build rooms in the mound to grow fungus, which is farmed by the termites. The excrement of the termites fertilizes these mushroom gardens, which helps feed several million termites who live in these colonies.  Termites often feed each other from the mouth or the anus, especially soldier termites whose jaw grows so large they cannot feed themselves.  The workers, who eat tasty wood, have microbes in their gut that help them digest the cellulose

What is the rest of the thousand-story building for?

It is an engineering marvel to prevent the sensitive termites from their greatest fear: becoming dehydrated.  Even in desert-like conditions, they require 90 percent humidity and the protection of underground tunnels.  The structure is a massive complex of corridors designed to circulate air in just the right way, that is, to eliminate CO2 and water and take in oxygen with just the right humidity. The termites use wind, solar energy, north-south positioning, and extremely complex engineering to survive.

Although it takes years to build these mounds, if damaged by large animals it can be repaired within months.  During the process of repair soldier termites defend the workers.  Since termites have almost no vision, the workers each carry a piece of dirt with saliva on it. It is thought that other termites then use the smell of the saliva-covered dirt to signal the correct place to rebuild the complex structure.

Where is the Engineer?

Currently, inadequate explanations for these remarkable engineering and communication abilities assume that termites communicate in small pieces of data as they bump into each other. Here again is the computer theory of animals. An attempt to ignore the complexities of these structures which human engineers cannot build.

Consider: if an alien were to watch a group of construction workers building a sky scraper without being able to hear them communicate, the alien might make the same assumption of self-organization.  Humans build large structures, repair them, and give information to each other constantly.  Does this mean humans don’t have individual intelligence or a mind?

What does this extraordinary engineering ability in termites say about the capacities of the individual termite?