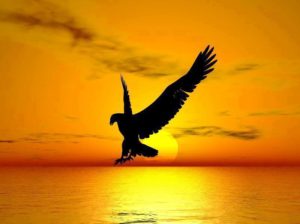 Flying overhead the scrub jay sees a comrade is dead. The observant bird continues to fly, but is now agitated and calling loudly enough for birds to hear far away. Others now call out and spread the word. The flock of jaybirds all come to sit near the dead bird, still making a very loud chaotic noise. The large congregation of birds then sits together observing the dead. Despite the need for food, the group doesn’t forage for up to 48 hours while they sit near their fallen brethren.

While the researcher’s conclusion was that the birds were sitting for two days without foraging to find out where the danger was coming from, it certainly appears that the jays were grieving.

The question of emotions in animals is hotly debated, but there is no question now that many animals experience a wide range of emotions. For years it was thought that the size of the brain determined the advanced mental characteristics of animals. 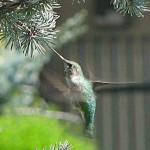 But, there is now increasing research demonstrating advanced capacities with very small brains. For example the tiny hummingbird has advanced memory and future planning, including knowing exactly which flowers that they have already visited.

In addition to having excellent memory, painting ability, and a sense of wisdom, large brained elephants have been noted to mourn loved ones. Elephants return for years to the site of the deceased bringing leaves and sticks to mark the spot. 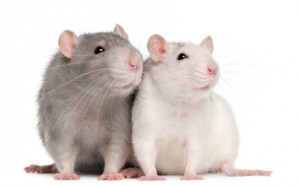 A previous post described a rat showing empathy for a comrade placed in a cage. This significant research demonstrated that a rat would struggle to open a cage to free another, despite any personal advantage. Even more surprising is that the rescuing rat also shared food with the rescued victim.

Creatures with much less evolutionary brain development have advanced abilities. Amoebas, with no brain at all, sacrifice themselves for other amoebas, especially if they are related. With only a primitive midbrain, lizards show advanced decision-making abilities.

These new findings are difficult to explain by current brain theories. Birds show much greater intelligence than would be expected by comparing their brain to a human. For example, in birds the brain center correlated with their advanced abilities appears to be a primitive region in the striatum, called the medio-rostral neostriatum.

What Do Birds Know?

The most intelligent birds appear to be the parrots, crows, ravens, and jays. 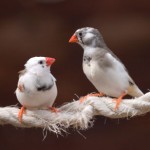 awareness, and tool use.  Many birds name their individual offspring, who are then known by that sound for the rest of their lives. Some birds use the memory of specific smells to navigate trips of thousands of miles of land and ocean. Finches learn grammar, like humans by listening to others. Bengal finches use strict rules of syntax.  That is, the order that they use different tweets is important, more complex than language used by monkeys.  In a study where young birds were raised in isolation and developed an abnormal song, in another generation the children of these aberrant birds gradually learned the “normal” songs.

Caledonian crows are now known to have metacognition (meaning they are aware that they know), as well as advanced memory, remembering specific people, cars, and urban situations, maintaining grudges with specific people and cars for several years.

Their tool use is as advanced as primates, able to use multiple different tools including unnatural ones in multi step processes. One crow upgraded a tool, molding a piece of wire into a hook in order to get a treat out of a difficult place.  Recently they used a set of three different tools to perform actions, a feat greater than chimpanzees are able to perform.

Pigeons, with much smaller brains, have also adapted to complex urban life. They are able to tell the difference between two similar appearing researchers wearing the same clothing, approaching each differently.  Pigeons search out discarded food, and adjust their pitch to avoid competition with the quality of noise in the urban surroundings.

The parrot Alex, studied by Dr. Pepperburg for many years, was able to invent new words, such as “banerry,” for a combination of banana and cherry, when referring to an apple.  Alex understood zero. He was able to count and add numerals up to eight.  Significantly, when Dr. Pepperburg left the hospital the night before Alex died, he said “You be good. I love you. See you tomorrow.”

While many birds are able to invent complex nests, bowerbirds show advanced artistic ability, using optical illusions in order to maximize their already impressive structures, all to impress their ladies.

Tropical birds show advanced planning and memory in gathering a meal of ants.  Army ant colonies periodically attack other insects in large swarms. Even when not hungry, the birds find the new nests and keep track of the nests of multiple ant colonies planning for attacks when the ants are on the move.

One type of bird in the African desert, the drongos, watches for predators making a sound every 5 seconds to let others know they are guarding. They protect smaller pied babblers who forage for insects while the drongos watch. The drongos then swoop down and take a portion of the food.  When a recording of the drongo sound was played back , without the drongos actually being present, the babbler birds had less fear and foraged in a wider area, expecting the drongos to help them in exchange for some of the food.

Despite small brains, which have been called “primitive,” birds show a wide variety of cognitive and social abilities. The finding that jaybirds appear to mourn over a dead comrade shows how little we know about the inner lives of animals.