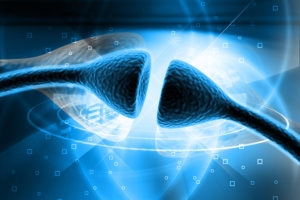 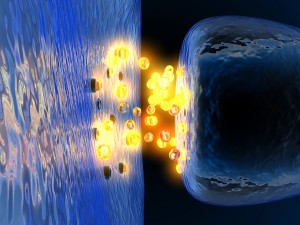 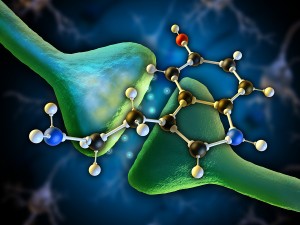 Most research into brain structure focuses on synapses where neurons rapidly communicate with each other with electrical signals along the axon triggering vesicles with specific neurotransmitters that convey a specific meaning to the next neuron. In the other, less researched type, the electrical synapse directly transmits electricity through the synapse to the next cell by way of a cluster of channels between the two cells. In fact, these two forms of synapse communication are absolutely necessary for each to work in all brain regions.

Many Forms of Transmission in the Brain

There have been a variety of new forms of information transmission described but it is too early to tell how significant they are. These include diffusion of neurotransmitters in extra cellular space, exosome vesicles transported from one cell to another and cell-to-cell nanotubes. Electricity in the brain can come from many different sources (see post on electricity in the brain.) Electrical fields are described around the neuron and in the intracellular space that influence nearby neurons or entire groups of neurons. Yet another is with synchronous brain waves. 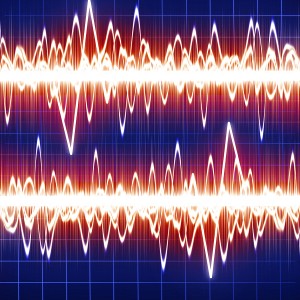 Studies on brain waves demonstrate that neurons in two regions oscillate with synchronous beta waves describing color and two different regions oscillate beta waves for spatial orientation. These regions are sharing information in the form of waves at the same time that chemical synapses are sharing information. Theta resonance has been described in some cortex regions. In contrast some inhibitory neurons have been noted to have a resonance in other ranges. 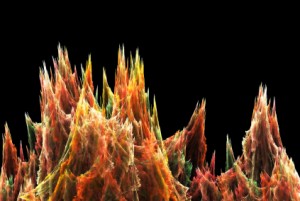 All electrical currents in a section of the brain combine to form the voltage potential that is the sum of all the activity. This activity is different at each point and forms  an electrical field. The local field potential, LFP, is the sum of all electricity in a region of extracellular space. A previous post described that extracellular gradients can, also, correlate with mental states.

Electrical currents contribute to LFP from synapses, calcium spikes, action potentials, and after potential of the spike. 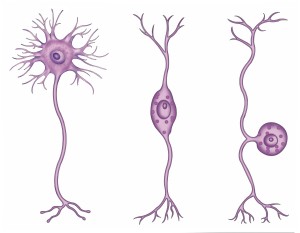 Most importantly, the specific shapes of neurons and the rhythmic timing affect these currents. The common pyramidal cell in parallel columns has very thick dendrites creating strong flow of ions in the extracellular space, which are additive. Symmetrical neurons in the thalamus and cortex have equal sized dendrites and electricity is not additive. Folding of the cortical gyrus creates different electrical effects. Inhibitory neurons create gradients between the cell body and dendrite.

Recent findings suggest that of all these new mechanisms discovered, electrical synapses are equal to chemical synapses in importance and sophistication.

Since it is more difficult to study electrical transmission than chemical, it was thought that it occurred mainly in cold-blooded vertebrates, not mammals.  Now it is clear chemical and electrical synapses exist throughout the human brain. They were first described in the retina, olive and olfactory bulb, but now everywhere. The very significant inhibitory neurons, critical for cognition, are prominent users of electrical synapses. But, even more important is that it now appears that both types of synapses are necessary for the function of either.

In evolution, chemical transmission came before electrical communication. Chemical signals are widely used between cells in any community of bacteria or multi cellular organism. It is interesting to note that in evolution invertebrates developed identical structures (innexins and pannexins) from entirely different sets of genes. 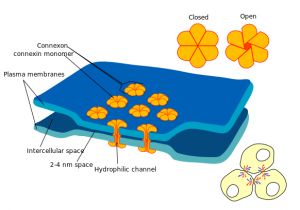 Electrical signaling uses gap junctions, a structure made of many clustered channels connecting the two cells. This allows electrical signals to flow both ways between the two coupled neurons. It also allows some small molecules such as calcium and cyclic AMP to flow through.

The gap junction is very small, 3 nanometers, (synapses that use neurotransmitters usually are 20 to 40 nanometers) and is very fast and bidirectional. These synapses don’t amplify the signal the way chemical synapses may with addition of multiple inputs. With the very rapid response electric synapses are often found in loops for rapidly needed defensive measures. Electrical synapses, also, trigger synchronous waves and can cause increase in the currents of the local field potential in the extracellular medium.

Two connexin six part molecules, one from each cell, form the channel. Vertebrate neurons make five known connexins from a family of 20 genes. The retina is the most studied junction gap. The most widely used connexin is CX36.

The critical feature of the gap junction is that the electrical signal goes both ways. This allows many neurons to be connected in a large system. These neurons can share electricity without action potential spikes from the axon. Gap junctions connect a large group of neurons together and couple them as they accumulate depolarizations that are not sufficient for an action potential. This allows all the coupled neurons to fire at one time in 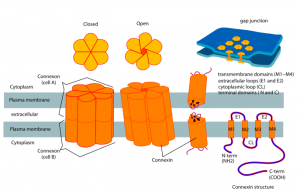 Another unique property is lateral excitation — the ability of sensory neurons to excite many of its neighbors allowing a stronger signal and more sensitivity to sensory input.

Escape Response: These lateral gap junctions form specific small networks of neurons that consist of both motor and sensory neurons and are used for very important single movements, often a critical escape mechanism. One example is the tail-flip escape response of a fish. In humans there are cerebellar interneuron networks that spread responses rapidly through gap junctions. These transmissions have no delay and are very reliable.

Electrical synapses, also, show neuroplasticity; they use very complex, dynamic mechanisms that are constantly remodeling and replacing connexin channel subunits. The strength of the channel is altered by neuroplastic mechanisms

In chemical synapses there are many scaffolding proteins, including the extremely complex post-synaptic density consisting of 1000 interlocking proteins that are critical for neuroplasticity. There are similar multi protein scaffolding structures in each cell that support the connexin channel and its modifications. These mechanisms are very complex and just now being discovered.

Large complex proteins help create and insert the pieces for the new connexin channels. It is now known that there are many different types of structures in gap junctions, and both sides of the connection can be different. Different properties of the channels are related to two different connexin structures coming from the two different cells. The different structures can determine which way the electrical signals will flow for that message and that connection. This differential flow helps groups of sensory neurons to cooperate, as in the auditory system.

The complex protein structure, which is similar to the post-synaptic density of chemical transmission, is called the semi-dense cytoplasmic matrix. This matrix adds molecules to the channels, which also is a way of modifying its communication.

Electrical Synapses in the Fetal Brain 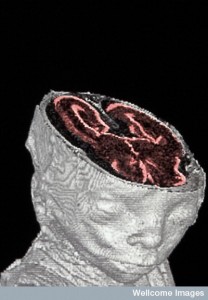 As the spinal cord develops, lumbar motor neurons communicate with gap junctions, leading to synchronous activity with multiple neurons as the motor system develops into a single neuronal system for each muscle by neurons competing for the job. Gap junctions are critical for the transition from multiple to single fiber control of muscles.

Later, in the hippocampus, glutamate LTP also needs the electrical synapses to function. 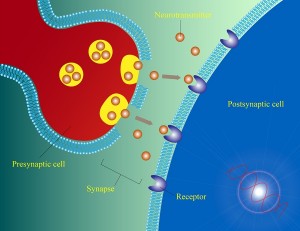 Neurotransmitters are secreted from presynaptic neurons into the synapse space and then bind to receptors in the postsynaptic neuron, which produces a cascade of signaling in the post synaptic cell. A nearby cell can release other neuromodulators, such as dopamine, that alters the strength and transmission that that synapse.

Electrical Synapses In the Eye and Ear 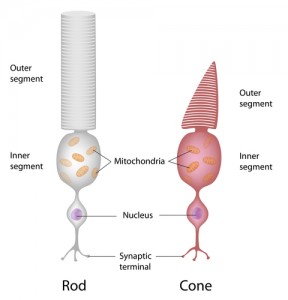 In rod and cone neurons of the eye, dopamine stimulates D2 receptors, which increases electrical coupling between both types of sensory cells. In another system, rods and cones send information to bipolar cells, the rod using electrical synapses, regulated by dopamine and nitric oxide. The retinal circuits are altered by the electrical synapses.

Another mechanism for rapid chemical transmission of amino acids in the auditory system uses mixed synapses. Chemical and electrical synapses in the high frequency range (500Hz) stimulate neuroplasticity and long term potentiation. Both the glutamate and electrical synapses are affected by this neuroplasticity. It appears, also, that the glutamate along with an increase in calcium stimulates the electrical neuroplasticity. An important protein, CaMKII, which is found in the post synaptic density, is critical for the alterations that occur in the connexin electrical channels and appears to have many different effects. 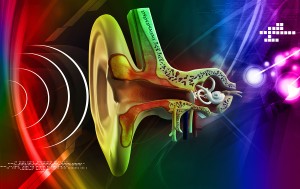 Another critical function of electric synapses is producing synchronous firing of large groups of coupled neurons. This mechanism allows the post synaptic densities of a particular glutamate neuron to alter and modulate electrical coupling throughout a network of neurons that are all coupled. This produces synchronous firing of the neuronal network.

Since electrical synapses are so critical to development of the entire nervous system, it is logical to consider that dysfunction in gap junctions might cause disease.

Alterations in connexins have been associated with juvenile epilepsy.

It was stated that electrical synapses are particularly important in interneurons in the neocortex, thalamus and hippocampus. They contribute to the gamma frequency synchronous oscillations that appear to be very important for consciousness and for the bonding of neurons that creates memories (30 to 80 Hz). Alterations in these oscillations have been considered to be relevant in schizophrenia, Parkinson’s and autism.

After brain injury, the many electrical synapses from fetal development reappear and realign neuronal networks. After peripheral injury, spinal motor neurons are recoupled as they were in the fetus. It is possible that this stabilizes the situation until repair can occur by re connecting the synapses that were broken. 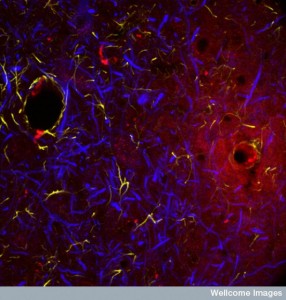 In stroke caused by lack of blood flow and traumatic brain injury there are increased connexins and gap junctions. This change occurs 2 hours after the injury, stimulated by the large outpouring of glutamate in the damaged region. The interactions of the chemical and electrical synapses keep neurons from dying while repair is ongoing, (just as in the fetus).

But, it is also shown that gap junctions can cause negative effects in the damaged brain. In this situation there is rapid communication of the damaged nerves with the functioning neurons that are nearby possibly spreading the injury. 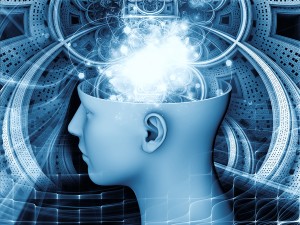 We are just scratching the surface of the vast complexity of the living brain. Electricity and molecular interactions are both working together constantly in the spike along the axon with rapidly changing ion channels, in the electric current of the local field potential, in the flow of electricity through connexin channels, and in synchronous brain waves.