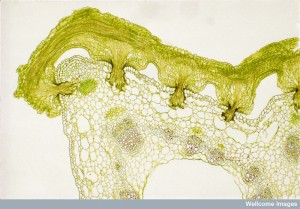 Previous posts have demonstrated elaborate communication and defensive abilities of plants using senses of touch, sight, sound and smell. Recent research shows plants engage in back and forth intelligent warfare with microbes using newly designed proteins for attack and defense through self-editing of DNA and RNA. Very recent research shows remarkable ability of tomato plants turning a warning signal into a predator toxin and plants ability to hear the vibrations of predators.

But, all of this doesn’t compare with the Dodder plant. Dodder not only uses taste, smell, movement and touch to manipulate other plants, but is, also, able to hijack all of their genes. The remarkable Dodder plant might be the most intelligent plant.

This post will briefly summarize the previous information on plant communication and defensive maneuvers. For more detailed descriptions see previous posts (Communication with microbes, Defenses, Listening to other plants, Plant intelligence). Then, the post describes the remarkable Dodder and two other new findings about tomatoes and the ability of plants to monitor the sound of predators.

Plants exhibit elaborate problem solving, planning, communication, and defense in relation to other plants and many different microbe and animal species.

Microbes Constant Communication with plants – A previous post described in detail the elaborate back and forth communication signals from microbes, fungus and plants to cooperate in building nitrogen factories in plants. The nitrogen fixation process produces major alterations in plant cells, a path for bacteria and fungi to follow into the plant through “calcium signaling” and, then, a structure to house the factory.

Defense – Plants can manufacture complex toxins to kill predators. The mustard plant plans ahead to create a powerful toxin only at the exact time in the morning, just after dew, when the mold spores will land. These toxins are so powerful they would be extremely dangerous to the plant if not exactly timed.

Intelligent War with DNA/RNA self editing – An intelligent war rages between viruses and bacteria that have been described other posts.

Dodder Is the Most Intelligent Plant 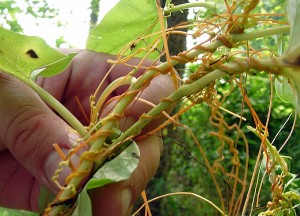 The Dodder plant (Cuscuta pentagona), related to morning glories, is a predator. It is not able to use photosynthesis to produce its own energy and materials and, therefore, must prey on other plants for nutrients. Dodder can attack multiple plants at once, and often destroys tomato plants. It is aggressive and toxic and has developed many very remarkable properties. It is, perhaps, the most intelligent of all plants.

Research shows that Dodder is able to sense other plants, even feet away, and won’t grow towards a fake plant. It grows towards the plant using its sense of smell for navigation. When near, it touches the plant with a feeler and can detect whether it is a high quality plant with the necessary nutrients. If the plant is not to it’s liking with little nutrient stores, such as a wheat plant, it pulls away and grows towards another plant. 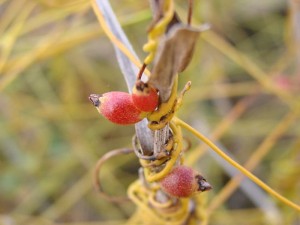 When it finds a plant with many nutrients, such as a tomato plant, it winds itself around the victim multiple times and, then, produces a device called a haustoria, which inserts itself into the vascular system of the victim to extract nutrients.

Recently, it was found that it extracts a lot more than nutrients. The Dodder plant, as well as moving, sensing, analyzing, and extracting nutrients has, now, been shown to take up the RNA information of its Arabidopsis and tomato victims. Remarkably, it passes this genetic information on to other plants. The RNAs move both to and from the Dodder plant. These RNA pieces included the full information of thousands of genes, including half of the victim plant’s genes.

Extracting RNA with the Dodder Haustoria

The extraction mechanism involves the sucking organ, the haustoria, which comes from the stem near the place where the Dodder is coiling around the victim plant. The hausteria is able to puncture the victim and then set up connections with the plant’s blood vessels. The hausteria tightly grabs the stem of the plant and only goes to the center of the victim’s stem and not to other tissues.

Previously, it was thought that only water and small nutrients went form the blood to the hausteria, but now it is found that large molecules, including critical RNA, proteins, and even complete viruses travel from the victim to the attacking Dodder. It was previously known that Dodder is able to transmit viruses to its victims. But, it was not known that Dodder takes up viruses and genes from one plant and transfers it to another. 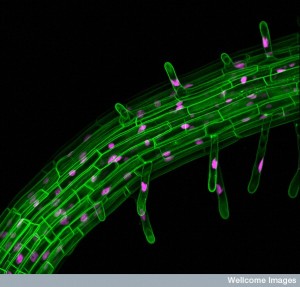 Some messengerRNAs (mRNAs) allow the Dodder to track the condition of the plant that it is eating. The Dodder can send messenger RNAs into the victim plant to alter its function. It is not clear whether these messenger RNAs make proteins in the new plant. The mRNAs do vanish after several hours in the Dodder, which means its usefulness could be quickly accomplished. Dodder has a constant exchange of genes between itself and the other plants it is feeding on. 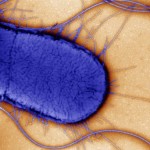 This transfer of genes by Dodder is equivalent to horizontal gene transfer (HGT) by microbes—the life blood of their evolutionary process. It was not known that messenger RNA could travel this widely. HGT, among microbes, has almost always occurred with DNA, not RNA. The mRNA sends messages telling cells to make specific proteins. The Dodder might be lowering the plants defenses with this genetic information.

When attacked, plants can secrete chemicals that are toxic or deter other insects from eating them. They, also, make compounds that become airborne as signals and attack molecules. These chemicals can attract enemies of the attacking insect. They, also, use emissions to warn other plants of the attack. 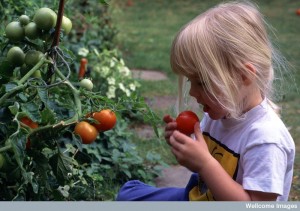 When insects damage tomato plants, they secrete a chemical into the air to warn other plants. The plants that receive the chemical turn it into a weapon to stop the invaders. It is not known how plants smell, but they are able to understand odors and respond to them in various ways.

The damaged plants’ airborne message was the chemical (Z)-3-hexenol. The plants exposed by air to the messages from the damaged plants metabolized the (Z)-3-hexenol into a chemical called HexVic. HexVic was able to kill the cutworm larvae. In this way, the tomato plant directly transformed a signal into a weapon.

Plants Respond to Sounds of Predators 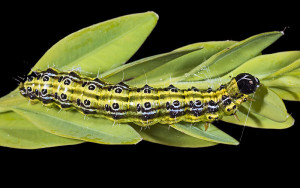 The level of vibrations from the sounds of caterpillar eating were extremely small, moving the plant a ten thousands of an inch. This shows the great sensitivity of the plant’s hearing sense

Is the Dodder the Most Intelligent Plant?

The Dodder plant, without the ability to use photosynthesis, must attack other plants for survival. Dodders are able to attack plants by moving, sensing, analyzing, and sucking up nutrients from blood vessels with the haustoria, a special device that is produced after a Dodder finds a high quality victim. It was found, recently, that plants are able to design new proteins using self-editing of their own DNA, equivalent to the process that makes antibodies in humans. It was, also, found recently that they use different types of RNAs in that process.

Now, it has been discovered that Dodder is able to pick up large molecules including proteins, DNA, RNA and whole viruses. Dodder is, also, able to transfer this to other plants, equivalent to the horizontal gene transfer of microbes. In microbes, HGT is a critical process in evolution. It is not known how significant the Dodder gene transfer is in evolution. Dodder is able to affect the victim with specific genetic material. It was known that Dodder could transfer viruses from plant to plant; now that mechanism is understood.

We await more research on the remarkable intelligent Dodder.