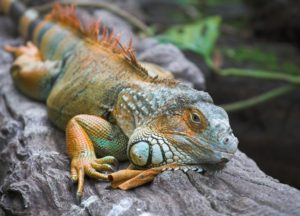 The four recently hatched iguanas formed a group and a leader emerged. When walking in single file the leader looks back to check if everyone is there and okay. Now, after several months, they are going to leave the nesting island and swim back to their homeland. The leader swims out first. When all of the others didn’t follow he circles back checking and waiting for those who are anxious about swimming. Finally, when everyone is able to go, they swim on as a group.

Reptiles are not supposed to have such advanced social skills. Actually, they have a lot of surprising abilities.

Necessary to Study in Nature 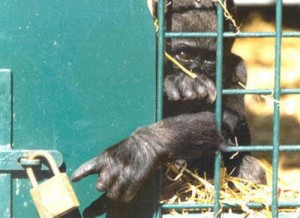 Previous posts have emphasized that animals in captivity cannot be accurately studied for intelligence. They don’t like to be captives and don’t perform. Strangely, this is even true with flies.

A big difference is seen in elephants in the wild and captivity, females living three times longer when born in the wild rather than those born in captivity. Even dogs, who are highly integrated into human life, have psychiatric symptoms if not treated well.

Zebra fish are popular in scientific studies, but housing conditions have a major influence on scientific results. Research in laboratory mice shows that not having a natural 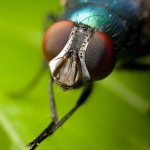 environment might have affected results of many unsuccessful trials of medications. Even with flies, one study showed that those studied in the laboratory followed circadian clocks but in nature they followed the natural light.

It is logical, therefore, that reptiles would also demonstrate different social behaviors in  natural settings. 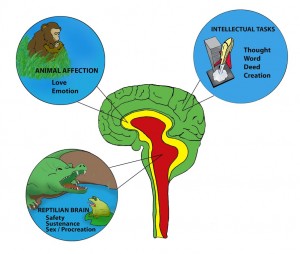 Early brain theories assumed that advanced abilities of primates were unique to the evolutionarily new large cortex. The midbrain was associated with the apex of reptiles’ awareness and assumed to imply less cognitive abilities and few social skills. The limbic region midway between the so-called primitive midbrain and the new large cortex were noted to be the emotional centers of the “limbic system”. Limbic structures, including the amygdala, hippocampus, and nearby cortex, were assumed to be uniquely relevant to advanced social behavior.  This “triune brain theory” assumed that increasingly advanced behavior correlated with the evolutionary advances in these three brain regions. Despite the evidence of much greater brain complexity that has emerged, the general outline of this view of brain is still a background assumption.

The most recent brain research, shows that it is really not possible to define exact regions for consciousness, or even specific forms of intelligence. 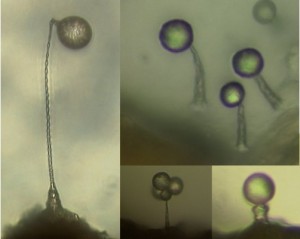 Cognitive abilities have now begun to appear in very unlikely places. Previous posts have noted how small animals, insects, plants, and even microbes show advanced forms of cognition.  Advanced social characteristics of amoebas, with no brain, have been observed. Amoebas have been shown to sacrifice themselves for other amoebas, especially if they are closely related. It is, therefore, not surprising that reptiles would need a re-evaluation of their abilities.

Up until now, perhaps the most shocking findings among small brains have been the very advanced behavior of birds. 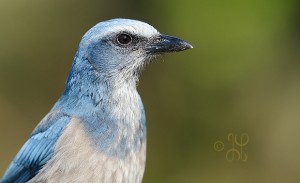 Recently, jay birds have been observed grieving. A previous post described the entire group of birds sitting for 48 hours near a dead brethren.

Birds have been shown to name their offspring.  Birds use smell memories to travel thousands of miles. Finches learn by 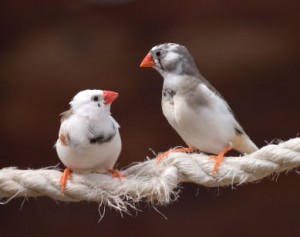 Caledonian crows are now known to have metacognition (meaning they are aware that they know), as well as advanced memory. They remember specific people, cars, and urban situations, maintaining grudges with specific people and cars for several years. Birds show advanced planning and art.

Alex the parrot could do arithmetic, invent words, and the night before he died told his doctor friend that he loved her.

Reptiles are cold-blooded vertebrates that are not birds or mammals. There are a large number of different species including 300 species of turtles and 9000 species of lizards and snakes. 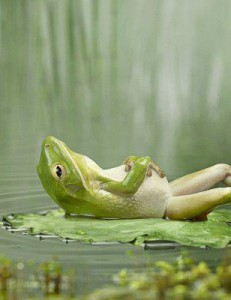 Reptiles are not supposed to be smart, only concerned about survival and responding only to instinct. But, these long held assumptions have now been refuted by research in natural settings.

In fact, almost all of the recently studied reptiles exhibit advanced social behavior including pair bonding, recognition of their family, and care of children. Recently lizards, turtles and crocodiles have shown social learning, play behavior, and cooperation.  Very recently they have demonstrated counting, advanced learning, and problem solving. 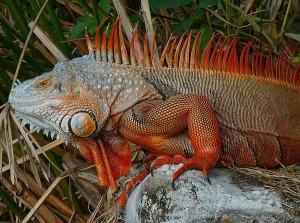 The green iguana, studied in a natural setting, has recently shown very advanced social behavior. This iguana has often been sold as a pet where it is given little stimulation to show its advanced cognition and has been considered unintelligent. In captivity some individuals have demonstrated specific personalities. Scientists have considered them rigid and stereotyped. But, only in the natural setting has their social capacity been observed.

In mating season, males defend a specific dead or almost dead tree from other males.  As many as 8 females come to the tree and compete for his affections.  Here he performs by 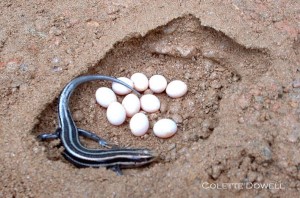 changing colors from green to orange. After copulation he stays nearby guarding the woman to avoid other males intruding on his future children. Females later migrate a distance both walking and swimming to nest. In the example given at the beginning of this post, they swam to a nearby island. There, they share nesting areas with as many as hundreds of others. They build complex burrow systems that are used over and over and improved upon. Crocodiles stay with their nest, but the iguanas do not stay the whole time, but do return to check on the eggs. 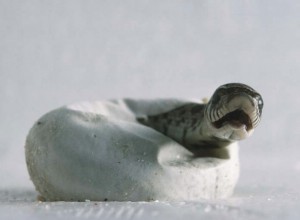 When the babies are just hatching from the egg, they look around and duck back in.  They often stay in the eggs observing other babies to see if it is safe to emerge, and often follow the cues of others that are hatching.  Some seem to jump up and down when finding others.

Approximately, four babies form a group of siblings called pods, which stay together for months. The rub up against each other frequently, while wagging their tails like dogs. They groom each other and sleep together. As noted above, they walk in a line with the self proclaimed or chosen leader checking on the others. Prior to returning to the original territory of their family, they rub each other’s heads.

Studies have shown that these babies do watch out for predators together and protect each other.  In an experiment males protected females from the predators.

Birds and mammals seem to have many different habitats and food sources, and have complex social behavior.  Lizards are supposed to use only stereotyped behaviors.  Because of the assumption that they could not learn there has been little research until now. 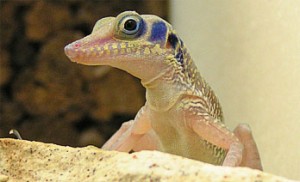 The small lizard, Anolis evermanni, was tested for cognitive ability with the same devices used to test bird’s problem solving abilities. Anolis did better than birds, including crows, in a test of opening a cap, required fewer attempts to learn and remembering exactly a day later.  Anolis also used inventive techniques that they do not use in the wild with novel motor tasks.

In these tests Anolis was able to use multiple different strategies and, very surprisingly, was able to reverse course in addressing problems, unlearning incorrect approaches. Unlearning and reversing course is difficult for many mammals, and occurred almost instantly with Anolis. He also demonstrated very rapid learning and remembering associations to be used to solve problems.

Very recently, it was found that both birds and reptiles have unique centers in the brain housing neurons that appear to be similar to those in the mammals neocortex. The neocortex has been assumed to be unique in the higher order mammals with six distinct cortical layers of advanced neurons.

In birds it was recently discovered there are distinct groups of cells in a region called the DVR, the dorsal ventricular ridge, that have cells equivalent to the mammal’s cortex layer 4 neurons that input data, and layer 5 neurons that output data.  This DVR structure appears to be an advanced brain region equivalent in some ways to the human’s, and other mammals, neocortex. Some are wondering if there are some advantages of the 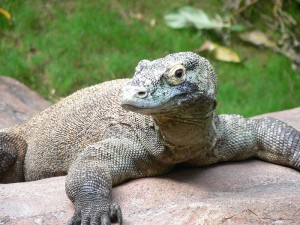 bird’s arrangement over mammals to carry out advanced cognitive tasks in language and cognition. For example, a bird can have a specialized nuclei for vocalization which would be impossible in the mammals.

Now, it has been found that in turtles’ brains, there is a region with similar layer 4 and layer 5 neurons. These cells seem to be distributed in one layer and are perhaps the reason that lizards have advanced cognitive abilities as well.

This research shows that it is possible that advanced neurons can occur in many other formats than the one for mammals, which can allow for advanced cognition.

It appears that wherever we study animals, without limiting the research to prison like conditions, there is evidence of advanced abilities.